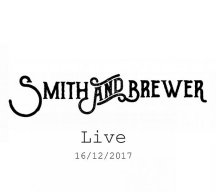 
I've only got one complaint about Ben Smith and Jimmy Brewer, and that is their name. To me 'Smith and Brewer' sounds like a high street accountants or an estate agent, or a chain of pub restaurants. I can't quite put my finger on why other duos who just use their surnames; Simon and Garfunkel, Roberts and Lakeman, Gilmore and Roberts, Craig and Willoughby for example, sound like musicians, but somehow Smith and Brewer sounds instantly forgetable. Maybe it's just a question of time and when Paul Simon and Art Garfunkel released their first album people thought their name sounded like a company of solicitors or architetcs.

In 2012 Joan Armatrading organised a nationwide search for local acts to support her on her tour. Ben and Jimmy, as solo artists, were both successful, and in 2015 Joan called them back to support her on her first solo tour. Having met, they started writing material together, realised very rapidly that they had chemistry and decided to play live. Their very first performance was in 2015 supporting Joan in front of an audience of around a thousand. Effectively they went from nowhere to the limelight overnight.

Their first E.P. entitled "Ben Smith and Jimmy Brewer" was released in 2016 and featured six tracks. Four of these tracks appear on their new album, a live recording from late December last year, recorded in a pub (The Plough), in a little village called Shepreth, just off the A10 in Cambridgeshire.

There's a definite feel of Simon and Garfunkel about this duo: two beautifully blended voices, accompanied with acoustic guitars. Very easy to hear why they were such a hit with Joan Armatrading.

There apear to be a few common themes amongst the songs on this album. Both "Isabella" and "Julietta" have one word titles comprising a girl's name, though apparently, according to them, "Isabella" is the name of a guitar, not a woman.

There are two songs both using the colour blue as a metaphor for sadness: "Another Shade Of Blue" and "Paint This City Blue". Another two songs, "Life's Too Short" and "Blow Winds Blow", both take the weather as a theme, but more specifically ignoring what the weather is doing outside - 'Life's too short to get down about the weather.' There are two tracks as well that deal with low self esteem. "A Better Man" is a song to a partner saying how wonderful it is that they are here with them, but they'd completely understand if she left because he always felt she deserved a better man. "Better Than Your Father" is similarly self-deprecating. It is direct to the singer's child, wishing them a long and healthy life, and hoping that they'll grow to be better than their father.

Some good humoured banter with the audience on the album as well. They introduced one song with a story about one time they had been playing in a pub and the management had informed them that people weren't drinking enough because they were listening to the band, so the bar had asked them to leave.

They are described as Americana, but there is a variety of different genres on the album, from bluegrass, folk and blues.

"Life's Too Short" is a real foot-tapping bluegrass ear worm. Once you've heard it, it is difficult to get it out of your head, but my favourite track is "A Lovely Day For Doing Nothing". It's a slow lazy blues song, with each verse ending with 'and nothing's all I'm doing now', apart from a sting in the tail at the last verse where it changes to 'and nothing's all I've got right now.'

Definitely a duo to watch out for - a modern day replacement for Simon and Garfunkel - what's not to like? - if you can remember their name.