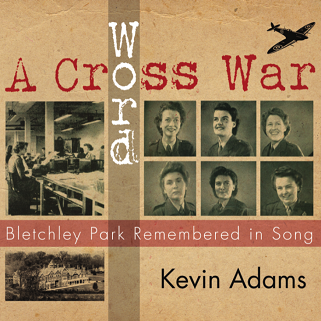 
Best known for his work with Stömp and Stocai, fiddler Adams was forced to retire from performance a few years back, and, with ex- Stömper Andrew King on bass plus a few old friends, has regrouped in the studio to produce this song cycle, oozing with English whimsy.

The story of the Enigma codebreakers has been re-told many times, but rarely in such a straightforward and sympathetic way, and, as the period passes out of living memory, it is time for folk musicians to record and preserve the legacy.

The overture 'The King', leads with timpani, strings and horns, marking the gathering storm, Brad Bradstock reading George VI's prophetic speech at the outset of war.

'Let's Begin' sketches the task ahead. Adams is an economical lyricist, the exposition of narrative is clear without unnecessary flourishes, and he has a sure touch with melody and unexpected chord sequences.

'Captain Ridley's Shooting Party', with a music hall feel, tells of the gathering of the team and the self-depreciation of this remarkable generation. The moving 'I'm Listening to You', about the work of a WREN on monitoring duty, sung by Sheena Masson, is powerful and evocative.

Various boffins get 'An Invitation from His Majesty', and we learn a little more about Alan Turing in '1932-Turing Writes', a spoken work vignette by Dorien James, leading into the melancholy of 'Safety in Numbers'.

Tension builds as the team struggle to develop the Bombe machine, in the face of appalling losses. An extract from Eric Coates inspirational 'Calling all Workers' contrasts with the reality of 'Day After Dreary Day', vocal by Marion Hill, telling of the boredom of repetitive work.

The size of the task is breath-taking, the players create a circuit board on a gigantic scale. Every piece of data is punched in cardboard, carried by human beings from hut to hut, in all weathers, along literal pathways. The computer in your pocket was originated from these many acres of huts with their machines of polished brass, Bakelite and blown-glass valves, and thousands and thousands of men and women. 'Enigma' tells of a single piece of information, a letter, on its journey to deciphering.

The mournful 'Night Shift-Middle Watch' tells of setback, and the struggle to regain the upper hand in the face of mounting losses at the height of the Battle of the Atlantic. Gradually the tide turns, and 'Seeing it Though' sets extracts of news-reels to anxious soundscape from D-day to VE day, leading into Marion Hill singing as Vera Lyn, as the sirens sound the all clear for the last time. The standout song 'Dance Round the Bonfire' (eminently coverable) takes us to VJ day. The coda 'The King: Reprise' rounds off the work perfectly.

Musically somewhere between Babbacombe Lee era Fairport and Supertramp (great sax work from Dorien James); a thoughtful and effective piece of storytelling, which carries the narrative accurately and authentically without embarrassment or contemporary agenda.