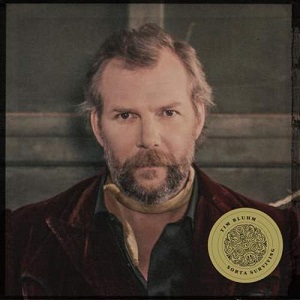 
More usually found fronting Cal-Soul outfit The Mother Hips, Bluhm's first solo album in over 10 years finds him returning to his love of old school honky tonk country. Backed by some of Nashville's finest session sidemen, including Jesse Aycock on guitars and vocals, he opens with the barroom piano and saloon waltzing 'Jesus Save A Singer', its lyric about a singer in search of salvation who tries to sing the truth he can't live setting the playful tone that permeates the material. That finds further expression in the too much booze-themed morning after a night on the town 'Where I Parked My Mind' with its classic steel licks and, likewise, 'Squeaky Wheel' a frisky banjo bluegrass romp about being on the road, resisting temptation and not letting getting older stop you rolling along.

Drawing on the Cash/Kristofferson storysong tradition, 'Jimmy West' is a David and Goliath tale of how his fatherless childhood friend stood up the school bully when he tried to take the singer's much admired belt buckle gift from his father. "More than ever this world needs Jimmy West", he sings giving the song a note of social commentary.

Not that he doesn't strike more serious notes, the pedal steel keening 'No Way To Steer' about the restless troubadour unable to make commitments ("show me the door if I have acted poorly and I'll show you the man I am") while the title track is about getting by in hard times as the bills pile up and, again, about the way the years take their toll on a musician for whom life on the road is "like selling poetry door to door" trying to keep the spirits alive. On a similar theme of survival, the ironically dreamily melodic Raining Gravel recounts the mid-30s struggle of dustbowl farmers to keep things together in the face of merciless weather and a compassionless government.

The remaining cuts are all covers, two very familiar with a lonesome slow waltz version of Cash classic 'I Still Miss Someone' and 'Kern River', Merle Haggard's tragic song of a sweetheart drowning. The third is perhaps less so, the slow drawled, bluesy, organ-backed 'Del Rio Dan' a song about a wanted man that featured on the Everly Brothers' 1972 release Stories We Could Tell with Ry Cooder on bottleneck guitar.

"Can a bad man be saved by singing a good song?" he asks. Well, if Bluhm's a bad man, this album certainly buys him a whole parcel of redemption.

Where I Parked My Mind