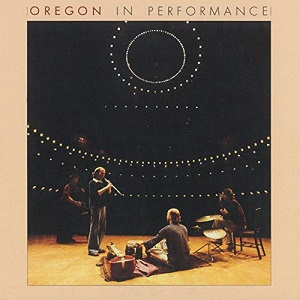 
Oregon is an extraordinary band, one that has always occupied a unique niche in the esoteric world of jazz improvisation. Formed in 1970 by guitarist Ralph Towner, reed player Paul McCandless, bassist Glen Moore and percussionist Collin Walcott, its stock-in-trade has been experimentation and exploration – both with a capital E – and enigmatic almost to a fault (again with that capital E). When they first got together, they consciously preached the virtue of remaining defiantly acoustic at a time when electric fusion à-la-Miles Davis’ Bitches Brew was the harbinger of things to come in contemporary jazz.

Considering the group’s long recording history, comparatively few of its albums seem to be available on CD right now. Unless I’m mistaken, only the late-70s albums Out Of The Woods and Roots In The Sky have been reissued on that format by BGO, and the 1980 Elektra double album In Performance now follows on from those in sequence. It’s an invigorating parade of pieces that demonstrate the band’s all-encompassing diversity and improvisational skills, and its nine tracks meander purposefully through landscapes of jazz (in all of its sub-genres), new age, contemporary classical and world musics, including some markedly unusual instrumental sounds and employing exotic percussion like the Indian tabla and the African kalimba. Free Piece comes the closest to bordering on quirky, as befits its title, yet even here the strength of symbiotic feeling between the musicians when playing purely percussively transcends any novelty issue stemming from the whistles and bird-calls that pervade much of the piece. Deer Path takes the sitar into less lyrical, abrasive territory, and Waterwheel contains a skittering, rushing virtuosic tabla solo (while the obviously titled Drum Solo also showcases Collin Walcott’s tabla and hand drum playing. But in the hands of these master musicians, even the more orthodox instrumental sounds are used in a stimulating new context: the Spanish classical guitar on Along The Way, the oboe/piano/double bass essay Wanderlust, for example, or the band’s arguably most defining composition Icarus which closes the set.

As you can hear throughout this set, these Oregon guys were forever seeking out and responding to new challenges, and In Performance shows the original band lineup recorded live when at the top of its game, before the first in a series of hiatuses and tragedies such as Walcott’s tragic early death in 1984 disrupted the flow of music-making. Notwithstanding which, the latest incarnation of Oregon is still out there making music…