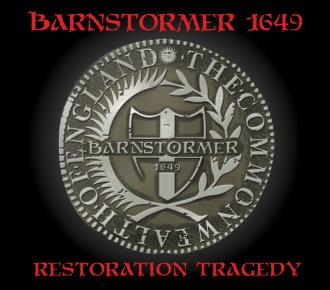 
Victors write the history. Times and events rewritten in the favour of those who eventually succeed. The Commonwealth Of England an eleven year period of crushed opportunity and hope of a better, fairer life largely forgotten as the Royalists regained control in 1660.

This then is a retelling and reimagining of those Revolution years through the words and music of Attila The Stockbroker and his band Barnstormer 1649.

So to the start. It's 1649 and the groundwork is being laid, the Levellers, the Diggers, the Ranters, an upsurgence of revolt against injustice. Common ground for common people. "The Leveller's Trilogy" an eclectic mix of medieval melody, of the words of Gerrard Winstanley (Digger's Song) and a wonderfully punk version of Leon Rosselson's more contemporary song "The World Turned Upside Down".

A path that is followed at greyhound pace, the breakneck bass of Dave Cook and the drums of M.M. McGhee the perfect foil to Tim O'Tay's recorders and Attila's lyrics that encourage you to engage. A serious message delivered in a way you remember and will have you singing along.

You really gain the feeling after the opening tracks that this is a group of individuals who are enjoying themselves and their music, even down to their names. M.M. stands for Mass Murderer, a moniker to a gentle man given by Captain Sensible (a one time player of bass in Barnstomer) and Tim who takes his name from a brand of shampoo.

A colourful portrayal of Ranter "Abiezer Coppe" seems larger than any life could be expected to be, a lads song of ever there was one.

Crumhorn led, the instrumental "Battle Of Worcester" is a cacophony that also features the Cornamuse, Shawm, Bombarde and Rauschpfiefe. A musical attempt to relay the final act of the English Civil War and a country divided.

Parallels can be drawn to today's Brexit headlining days, do we indeed learn from the past?

It's a question raised in "The Man With The Beard" and answered in the final lyric "He's not the Messiah or a naughty boy. But a man Murdoch wants to destroy. That's how we know he's the real McCoy. The man they call JC".

Lavished with a sixteen page booklet that explains and informs the story continues with lighter "The Fisherman's Tale" and darker moments before ending with a love song from Attila to his wife "Robina", which by amazing coincidence was also the name of protagonist Cromwell's sister.

All in all, "Restoration Tragedy" deserves to sit on your shelf as a concept album that truly works.

Finally, or should that be semi-finally, if you want to find out where the name for the group came from and why it wasn't "Attila The Stockbroker & the Vomiting Robins" or "Flounder" then I can wholeheartedly recommend Attila's autobiography "Arguments Yard".

Packed full of interesting anecdotes including Attila's flirtation with the charts (yes it did happen) and subtitled "35 years of Ranting Verse and Thrash Mandola" is a gem of a book which pointed me into searching for a copy of cult German film "Doppelpack" just to seek out Barnstormers version of Richard Strange's "And I Won't Run Away"(a live gig favourite) and just for Mr Baine's benefit, yes I do fit the stereotype!