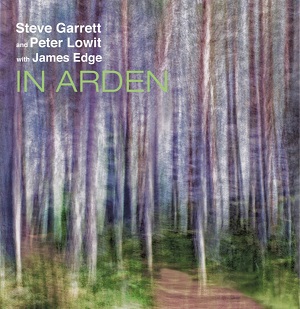 
Steve Garrett is a tasteful, melodic and inventive jazz guitarist. After the pastoral solo abstraction of DISCOVER AND ENDURE released earlier this year IN ARDEN explores his more acoustic side. With Bass player Peter Lowit Garret describes them as four hands, ten strings and two bits of wood, but what they do with folky themes, jazzy chords a slither of Bach is a delight. The title track, with lush but not cloying strings arranged by James Edge, is named for the home and resting place of Nick Drake. Steve has played in the church near where Nick and his parents lie, at some of the annual Nick Drake Gatherings.

The piece is full of echoed of Nick's nimble guitar, Danny Thompson's Double Bass and Robert Kirby's Strings. The essence of Thompson's Bass is also very present in "You Called Me". Steve's resonant lead guitar and Pete Lowitts Growling Percussive Bass strongly recalls Thompson's Whatever with Danny and Bernie Holland blurring genres. "Mr CC" is in honour of Clive Carroll acoustic master. Garrett and Lowit take glorious jazz liberties with a distinctively Bach solo Cello piece. The nimble dance of the music suits their duet playing perfectly. "Braw Day" from the Scots Scandinavian word for good or pleasing is simply beautiful. Time stands still while Steve and Peter take it in turns to lead through this delicate dance of a tune. Both players acknowledge that they stand on the shoulders of giants, naming Metheny and Haden, whose BEYOND THE MISSOURI SKY seeps through this beautifully expansive track.

The accompanying video is Steve Garrett at the 2018 Gathering playing the title track of this EP. If you like that, and whats not to love, then the IN ARDEN EP will not dissapoint