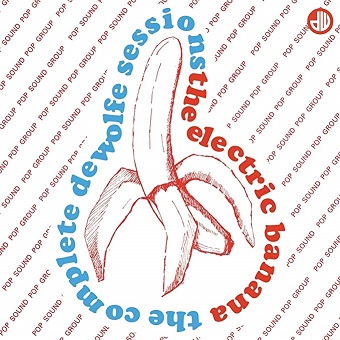 
In 1967, the music libraries were a means of supplying groovy soundtracks to groovy movies chronicling the Swinging London scene, but their way of circumventing the prohibitive licensing fees was to provide their own incidental music base by employing talented composers and arrangers to create an ”authentic facsimile” of contemporary groups. One such library was De Wolfe, the foresight of whose arranger Reg Tilsley led to the recruitment of the members of a genuine group (in this case The Pretty Things, who were at that point undergoing a Fontana-Emotions-era lull in their career) to work in this “parallel universe” of music-making-to-order. Thus it was that Phil May, Dick Taylor, Wally Waller and John Povey became The Electric Banana.

In 1967 they recorded an eponymous album, which, entirely in keeping with the fashion of the year, epitomised the early phase of the transition from mod-pop to psych-rock. Half of its ten tracks were original compositions, the remainder were solid-state, beefy instrumental versions of the same songs, bolstered by an in-house brass section. The styling ranged from mod-beat Walking Down The Street and punchy soul-beat Danger Signs to the forlorn ballad If I Needed Somebody, and two of the songs were penned by resident De Wolfe songwriter Peter Reno. Later that year, swiftly followed a second Electric Banana LP, More Electric Banana, which followed an identical formula (six songs with their “pre-karaoke” instrumental backing-track counterparts) but jettisoning the brass players. Here we find very distinct tastes of what the Pretties themselves were to conjure for EMI – opening track I See You was to surface as a key part of the S.F. Sorrow rock-opera, while Grey Skies and Love Dance And Sing prefigured the hard-psych-rocking sound of Mr. Evasion, whereas Street Girl was a hefty slice of primal garage-punk and A Thousand Ages from The Sun, although clearly inspired by the gentler side of Hendrix, also looked ahead to the more melodic adventures of Parachute.

The above pair of Electric Banana LPs appear for the first time complete on legitimate CD release, and they fit comfortably onto the first CD of this three-disc clamshell box-set. Disc 2 presents the next two Electric Banana records – Even More Electric Banana and Hot Licks, The first of these, recorded in late 1968, presented six group originals all recorded for a specific movie venture – the infamous Norman Wisdom “Swinging Southport” vehicle What’s Good For The Goose. At least four of these tracks are prime Pretties redolent of that productive era, with trademark vocal harmonies very much in the picture. It’ll Never Be Me in particular is very much in the S.F. Sorrow mould and Eagle’s Son and Alexander are arguably reminiscent of segments of the Defecting Grey single, while Blow Your Mind built up to a maximum-psych-style ending. The movie’s title number was a poppy throwaway, while Rave Up was a half-measure (though enthusiastic) workout. Much in the manner of its two predecessors, the LP was completed by instrumental backing-tracks, here of just the first four songs, and – somewhat incongruously except in terms of completeness – moody instrumental The Dark Theme, an isolated item provided for late-60s proto-exploitation movie The Haunted House Of Horror (on this three-disc set, this latter cut has been migrated to the third disc, purely for space reasons).

During the three or four years following the third Electric Banana LP, the band were dropped by De Wolfe and (effectively) split, while a succession of rip-off imposter-outfits seized on the Electric Banana name and produced trashy singles ranging from bubblegum and soul-funk to gay-movie soundtrack fodder… all the while, the genuine article’s three library LPs were regularly plundered for TV incidental music, with appearances on Dr. Who, Doomwatch, Public Eye and even Play For Today. This fostered a demand for more original material from the same stable, and The Electric Banana was reconvened with a slightly different lineup (Messrs May, Povey and Alan plus three new entrants) to make the 1973 album entitled Hot Licks. Its six songs ran the gamut of archetypal UK hard-rock of the time – strutting blues-boogie (The Loser), the Humble-Pie-like Sweet Orphan Lady, the Jean-Genie-riff-some Good Times, the thrusting Easily Done and the somewhat Jagger-ish I Could Not Believe My Eyes – with Walk Away as the obligatory retro-pastoral antidote. As customary, the second side of this LP consisted of the same songs’ backing tracks.

Recordings from Hot Licks duly appeared on the soundtracks of TV programmes Public Eye and The Sweeney, and in 1977 Messrs. May and Waller re-formed the group in the company of four more musicians, the following year releasing a comeback-cum-swansong album The Return Of The Electric Banana containing five spanking new compositions (credited to Waller and Phil May’s wife Electra Stuart) including a jangly, slightly Byrdsy Do My Stuff, a driving Hendrix tribute (James Marshall), and the lilting, swaying, acoustic-based anthem Whisky Song. Plus, naturally, the instrumental counterparts to these songs. The entire contents of this final Electric Banana album appear on Disc 3 of this new set, which marks the first appearance of all Electric Banana recordings under one convenient roof. And there endeth the recorded legacy of The Electric Banana – although their library recordings still surface occasionally on movie soundtracks (as recently as 2012).

This set comes complete with a knowingly authoritative booklet essay by David Wells, which really puts the whole Electric Banana affair into perspective and shines plenty of light into the foggy corners of myth and legend that have dogged the group’s reputation. The booklet also includes loads of photos.

The complete package is indeed exactly as billed: “the final, definitive word” on the recordings of The Electric Banana. So after all, bananas and grapefruit make surprisingly tasty bedfellows!