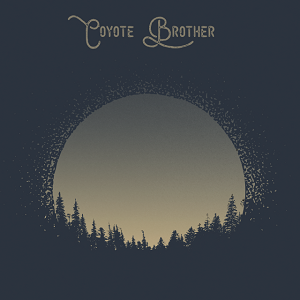 
With over a decade's worth of solo careers under their belt, Wisconsin singer-songwriters John Hardin and Hayward Williams found common ground in their experiences of panic disorders and depression, filtering this through classic country characterised by husky, world-weary harmony vocals (Williams has the deeper voice) and Eric Heywood's yearning pedal steel, their name a spin on the Native American/Hispanic folk tales of Brother Coyote.

Opening with the five-minute mid-tempo shuffling 'A Part of Me That's Lonely', (a sort of glass half empty Eeyore view of things and that "Once the good is all gone/Living becomes the wasting of time") fingerpicking skills are showcased on the early Simon & Garfunkel meet Ben Glover influences of 'Dharma Blues', a song about the price of enlightenment and progress, before a tribal drum beat sets the rhythm on the moodily atmospheric 'Palmetto Wine', a song which, like the former track comes with a Greek myths reference that puts a spin on the Orpheus story with "it ain't for daybreak that I'm leavin you/It's the thrill of lettin' go".

"Jesus wants me for a sunbeam, he don't mind if I get stoned" they sing in the opening lines of 'Holy Rollers', a piano-led and organ-backed goodtime old time gospel number about addiction and salvation ("to all my drunkards/And strung out junkies/To all my broken down, honkeytonk queens/Spread a little gladness to all God's children"), as they sing that "as long as you're a witness/To a little kindness/You'll stumble straight on through That By and By".

The album ontinues to serves up understated highlights, firstly with the soulful organ-backed folksiness of 'Alberta, Goddam', a variation on the traditional murder ballad Stagolee in which Alberta ("Skin as dark and shining/Like the moon on a raven's wing") , takes revenge for the shooting of her lover, Billy Lyons. Likewise, there's a bluesier toned rolling rhythm of the mortality-themed 'Lucky Ones' with its unsettling image of "a saline drip and blown out veins" and the excellent wistful strummed balladry of 'London Dry' and its search for redemption ("I can be a real bastard, babe/Stitchin' barbs to the things I say/But I've gotta do better by you my friend/So I'm worthy when my ship comes in").

They end with some Everlys-like barrellhousing for the self-explanatory titled 'Get The Living Done' before closing up shop with the spare, slow waltzing, steel-stained 'Mockingbird', a rework from Williams' 2009 Cotton Bell album, and its metaphorical lyric of the damage mankind has inflicted on the planet and the human race ("what must you think when you look at the world? Do you see a dying and disfigured shell") set against the hope of a rebirth ("Or do you see mother of pearl?") and "in the half light of a new day/Be free from us, Mockingbird, fly away".

Flying below the radar in terms of a wide profile and media exposure, the chances of you stumbling across this by accident are probably slim, but I would encourage you to seek it out as it's not only one of the best things I've heard this year, but has set me on a search to track down their individual albums (Williams six, Hardin two) too, Hardin due to release a new solo under the name of Bright Arcana this winter. Definitely one wolf you want to open the door to.