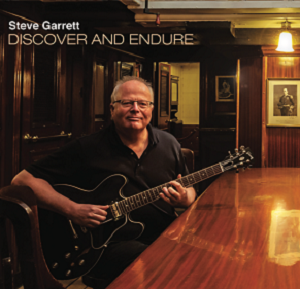 
DISCOVER AND ENDURE is a solo electric guitar album from Steve Garrett. There is considerable progression in composition and playing from EVENSONG Steve’s debut album released in 2015 and his guitar work holds your attention from the start.

The opening title track starts with some abrasive percussive guitar sounds, imagine the intro to CSN’s ‘Wooden Ships’. The percussive rhythm continues with the beautifully chiming sustained notes of Steve’s Gibson over the top. The piece is written for the Antarctic expedition of 1901, the background loop suggests footsteps while the melodies evoke the characters of the explorers. ‘Summer River’ is a wonderful sustained electric guitar piece. Layers of reverberating notes manage to conjure a sense of Garrett’s local river The Dee. His playing marries the chiming lyricism of 80s ECM Pat Metheny to contemporary experimental players like Dean McPhee. For all the edge the soloing over his looped rhythm is as smooth and flowing as classic Grant Green jazz. ‘Lament For The Children’ is a piping tune. Like Dick Gaughan’s stunning ‘51st (Highland) Division’s Farewell To Sicily’, Steve uses sustain and some clever fingering to create the drone and notes of the pipes, while managing to create a guitar piece that is both beautiful and foreboding. ‘Midnight Gathering’ pairs Steve’s percussive shuffling loop with a spry reel as his fast fingers create catchy, evocative folk dance music. Utterly captivating and quite unique. ‘Egdon Heath’ is a labour of love, Steve’s arrangement for guitar of Holst’s pastoral Orchestral piece. Heard as a child, playing it on the guitar, required tricky time signatures, bluesy scales, folk tunes and jazzy chords, which Steve reckons shaped his wide ranging playing style today. Through the piece there is space and darker patches with the guitar playing delicate and measured throughout, again simply stunning. ‘Lassie Lie Near Me’ is different again as Steve plays gently flowing solos over a looped guitar part, laying down beautiful folk melodies. For me it strongly recalled Pat Metheny’s playing on Steve Reich’s Electric Counterpoint suite. A stay in a remote Lake District hostel inspired ‘Black Sail Hut’. Steve’s playing is clear, decisive, resonant and beautifully recorded, as you would expect by Stuart Hamilton at Castlesound. The opening motif of rising picked notes is so evocative of space and the landscape, providing yet another opportunity to get lost.

DISCOVER AND ENDURE is a collection of pieces inspired by landscapes and our relationship to them. It is foremost a surprising album of music that manages to be engaging and quietly virtuosic at the same time. Steve Garrett is on the cover sitting in the RRS Discovery, physically connected to some of his inspirations, he looks contemplative and quietly pleased. However put one of his watercolours, featured in the booklet, on the cover and with his guitar and Castlesound’s ambience and you have Scotland’s answer to an enigmatic ECM album.