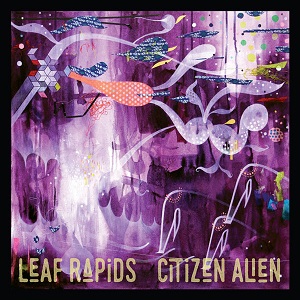 
Winnipeg husband and wife duo Keri and Devin Latimer drawn on their respective families stories for this collection of songs exploring place, people and history that opens with the brushed drums scuff of 'Dear Sister', a theramin-coloured song inspired by teenage pregnancies and the subsequent family fall-outs. A similar pacing guides There They Go with its piano and pedal steel, a musing on the songwriting process of musing on writing about the lonely existence of other people when you've got nothing better to do but to do the same.

Sung in coy little girl tones, 'Caragana Switch' has a McGarrigles touch to it as Keri sings of a child being sent to get a stick for her mother to beat here, expending the idea to the way we invite in relationships that cause us pain. Another shuffling rhythm, here with trumpet and percussive clicks, the title track has a particular backdrop, dating to 1942 when Keri's grandmother was declared an enemy alien, evicted from her home and , allowed just 100lbs each, loaded into freight trains and transported to Alberta to work as forced labour and live in a cow shed. She and other Japanese-Canadians finally regained freedom of movement in 1949, but their lost properties, businesses and possessions were never restored.

Theramin again setting the mood, 'Virginia' is a gentle waltz with pedal steel and piano inspired by working mothers raising their kids, encouraging them to strike out on their own but still holding on as long as possible. Riding a train wheels country chug and dressed with clarinet solo and tuba, 'Barbershop Shears' has its roots in Keri's great grandmother who arrived in Victoria from Kyoto as a sort of mail order bride for a local hairdresser, earning the shop a healthy clientele after she stabbed a customer who groped her in the leg, much to the cheers from those waiting in line.

They're joined by King Creosote on backing vocals for 'Husavik', a song inspifre dby the Icelanders who settled in Manitoba in 1875, naming their new home Gimli, or paradise, only to be assailed in turn by the harsh winter and a smallpox epidemic. Featuring pedal steel and dreamy theramin, 'Helen's Waltz', written by David and featuring a poem written and recited by daughter by Hazel is dedicated to his late mother Helen. KC hangs around for the dreamy lullaby-like 'Parliament Gardens' for another family number, this about Keri's great granduncle who was awarded the Victoria Cross in WWI and even had a lake and mountain named after him, but was left damaged by his experiences ("Wake up. You're standing on the bed again/Shouting fire at the top of your lungs…Trying to find your men in the trenches") about which he would never speak.

It ends on 'Twenty Storey's High', a playful fingerpicked number that will strike a chord with anyone who's woken up after the night before and wondered "What The Hell", unable to make a discreet exit. Leaf Rapids, situated in north west Manitoba is described as one of Canada's 'hidden treasures'. The same could well apply to the duo.