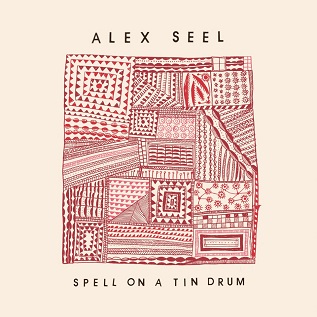 
Alex Seel's new album 'Spell on a Tin Drum' manages to convey a personal and intimate feel whilst still keeping a wry eye on the world outside, so it's no surprise to hear it was partly written in a caravan on the west coast of Ireland, and mostly recorded under a bed.

Opening with a surprising waltz, with hints of jazz in the chord progression, the album progresses through several moods - intimate singer/songwriter, rowdy brass bands, infinite sustain guitar - but never strays too far from the essential elements of Seel's excellent guitar playing and vocals.

Eyes Wider Than is a relaxed but driving blues-folk tune with a great pop-hook chorus and just one example where the track sequencing of this album really shines - the fuller sound highlights the intimacy of the following track Practical Mind, a solo guitar and vocal performance ruminating on someone too busy with their day to day 'to-do' lists to notice that life is going on around them.

In fact the entire album is a triumph of sequencing, each track with its own personality yet still managing to work as a part of the whole - it's a testament to Seel's songwriting and arrangement chops that he knows exactly which songs to strip back to their core and which ones to embellish.

Although the contrast between tracks is sometimes surprising, it's a welcome surprise, and never jarring. Stand out track The River hints at Jansch and Renbourn with its medievally-tinged guitar part and meter crossing vocal; Grass Is Greener combines 'Rainy Day Women'-style Salvation Army Brass and doo-wop backing vocals; and Blue Sky In Our Hands even has traces of Wilco about it (not just in the, perhaps knowing, title.)

A short album at nine tracks in just over half an hour, Spell On A Tin Drum is one of those rare things - an album that makes you want to drop the needle on the first track again as soon as the last notes of poignant instrumental 'Quietus' ring out.

As a statement of songwriting talent, of versatility whilst upholding an artistic voice, and of Alex's skills at arrangement, Spell On A Tin Drum couldn't be stronger or more accomplished - yet it manages throughout to maintain a mood of modesty and confidence, and therein lies the charm of this record.