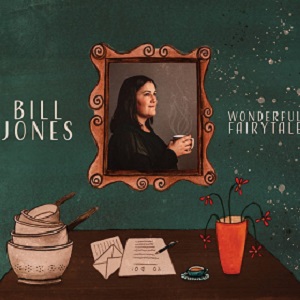 
Less than a year after releasing TURN TO ME, her fine debut album, Bill Jones won the Horizon (Best Newcomer) award at the 2001 BBC Folk Awards. Two further strong albums, PANCHPURAN, TWO YEAR Winter, a live set LIVE AT THE LIVE and some eps followed, before Bill took a couple of years off to raise her sons. Fifteen years later, after a much longer than intended break, Bill Jones is back with WONDERFUL FAIRYTALE, her long awaited fourth album.

If like me you loved Bill's music first time round, then you'll be pleased to know that the 2019 album is at least good as the first set of releases, if anything the playing is more assured and Bill's wonderful voice is even stronger. 'Arboretum', written by Bill and singer Anne Hills, with more than a nod to traditional 'The Trees They Do Grow High', is an assured opener. The tune rolls and bubbles along, Shanti Jayasinha's tasteful flugelhorn, the double bass and percussion means that the performance occupies that same chamber jazz folk space as later June Tabor. 'Wonderful Fairytale' is a candid exploration of some of issues when balancing family, work and music. The traditional 'Lavender's Blue' chorus represents the fairy tale ideal, the verses the reality. It's a second strong song, Gareth Davies-Jones contributes a fine second voice on a poignant song. 'A Far Cry' by Peter Crossley is a song Bill had wanted to record since playing accordion in his 1990's Who's That Man. 'The Cold Susquehanna' is a variation on the traditional 'Two Sisters'. Bill's piano playing builds a potent melancholic atmosphere, with brooding percussion and some emotional vocals. 'My Elfin Knight' is a heartfelt ballad, there is space compared to the previous track which Bill fills perfectly with just voice and piano. 'The Wear County Line' is part love song, part reflection from a fondly imagined future, delivered with affection by Bill. 'Humphrey Kynaston' tells of a repentant highwayman and lessons learned. Bill Jones' delivery is spot on, with the rich tale well told, both the telling and the arrangement have the feel of South Yorkshire's Kate Rusby in full flight. Bill's brooding reading of 'The Three Ravens' a traditional variation on 'Twa Corbies' is a triumph. The piano and vocal are masterful with emotional strings and the flugelhorn like a distant last post.

'Never A Lad' is another melange, as traditional song is joined to words by Anne Hills. The result song is a real earworm, with a tune, chorus and rolling tempo that ges in your head. Another powerful performance, Bill's vocal whether solo almost a capella or duetting with accompaniment is a triumph. 'Myself At Home', like 'The Wear County Line' and the title track, looks at the passage of time and how our perceptions change over time.

There is ultimately a sense of belonging and contentment in the cyclical nature of it all. Another musical gem delivered with gentle fire and integrity. 'Caden's Lullaby', written for Bill's youngest, carries on the idea, of cycles in this delightful lullaby. The string arrangement and the playing of the quartet is simply divine. 'So Here's To You' by Alan Bell closes the album song cycle. WONDERFUL FAIRYTALE opens with a song of meetings, marriages and growth and it ends with a song of parting and reflection. It's a stunning closer, a celebration of paired voices and harmonies. I can imagine it as a powerful concert closer. That Bill first performed it 18 years ago and the song was written by the man who first booked her for Fylde Festival makes it still more powerful.

This is a assured, perfectly sequenced, beautifully arranged and performed set of songs that speak to the listener. The playing and the singing have a gravitas and consummate power, this is a performer who has come back as a major talent. If I did stars this would be getting all of them. Life itself is the most wonderful fairy tale says Hans Christian Anderson, she's doing it for herself says Bill Jones.