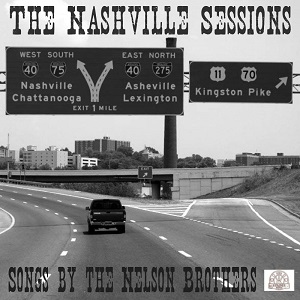 
Not to be confused with Ricky Nelson's sons, these brothers are Stafford-born Americana duo Steve and Simon. Back in the early 90s, they signed to Round Tower and released their debut album, Hometown, leading to an American publishing deal with the pair dividing their time between writing in Tucson and demoing material in Nashville with the likes of Kenny Malone, Dan Dugmore, Gretchen Wilson, Dave Pomeroy and Bryan Sutton.

They've now decided to release a clutch of these recordings as (for the present at least) a download only album, kicking off with 'The Good In Goodbye', Dugmore on pedal steel and Wilson on vocals, a great upbeat country number sporting the line "You put the good in goodbye / And the hell in hello" that also comes in two other takes, the more muscular guitar mix by songwriter Troy Olsen and an acoustic version.

Wilson also sings lead on the equally uptempo 'You Will Be There' with its line dance friendly chorus, the rest of the collection featuring Steve's warm vocals, the first up being the strummed ballad 'Little Hearts Can Have Big Dreams', a song of you can do anything inspiration to a nine-year-old girl that opens with a reference to Elvis walking the streets of Memphis trying to get his music heard.

An earlier single, the first love-themed 'You Can't Outrun The Rain' with Jeff King on banjo has a bluesier groove and is followed in twangy Waylon-style with 'The Hank Song', a down on my luck number that includes the great line "I'm just a song Hank Williams forgot to write".

Backed by urgent acoustic guitar and puttering drums interspersed with some ringing electric lines, 'Always Meant to Burn' is another great song with an underlying hint of Buddy Holly, then Wilson returns for the upbeat 'Leap of Faith' with its cascading guitar runs, King back on banjo for the fiddle-accompanied road and returning home trucker song 'Lu Ray'. 'Dance' is a gently rolling relationship on the brink number featuring dobro and organ that I could hear Don Williams singing while If Memories Are Made Of This' takes the pace back down for the narrator recalling his grandparents' enduring love as he prepares to embark on his own marriage.

Elsewhere backed by banjo 'Can't Get Enough is another love song, lying in bed together before having to face the day, 'Beautiful Thing's is a parent-child piano ballad achingly sung by a Nashville sessioneer known only as Michelle and, floating on pedal steel and dobro wings, while, another number about taking vows, 'It's Yours' really should have found its way to Tim MaGraw's inbox. It ends in ruminative form with another home thoughts from the road number, the simple fingerpicked acoustic 'The Beat of Your Heart'.

I don't know if any of these found their way onto any albums by any of Nashville's luminaries, but if they didn't then that's their loss and, in being gathered together here, our gain.