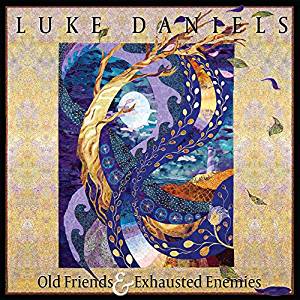 
Seemingly never one to tread a mundane, predictable path with his solo releases, for example 2016's Revolve & Rotate, for which he painstakingly restored and composed new music on a 19th-century polyphony machine, and last album, 2017's Singing Ways To Feel More Junior, which used children's folk rhymes as inspiration for some very adult songs about the dangers of global capitalism and artificial intelligence, Luke Daniels returns with a fourth album that again is striking in its originality and innovation.

Old Friends & Exhausted Enemies: Seven Centuries of Poetry from Chaucer to Auden refers to the many poets with whom Luke "collaborated to produce these songs and my own journey from some difficult first encounters to a much deeper appreciation of their genius in later life". Extracts of poetry from the past 700 years appear in the songs, with, variously, words, phrases, reworked lines and imagery, from the likes of Auden, Browning, Burns, Chaucer, Dryden and Jonson, being woven into (mainly) new songs for which Luke has composed all of the music. Enclosed with the release are very informative sleeve-notes, which in addition to giving full lyrics to each of the songs also give detailed references to all of the attributed work. Whilst the lyrics are crucial to the release, on this occasion the decision has been made not to quote any, in all honesty, because there are too many of the highest quality to consider cherrypicking.

Over two decades, Luke has garnered an enviable musical reputation. In addition to his work and achievements within the folk world, for example, being a BBC award winning folk musician, a performer with the likes of Cara Dillon, De Dannan and Jethro Tull's Ian Anderson, a Folk Musician in Residence of the Scottish National Museum of Rural Life and tutor on the traditional music course at Royal Conservatoire Scotland in Glasgow, together with sell-out shows at Celtic Connections Festival on two consecutive years with Songs of the Scottish Enlightenment, he has also received plaudits from the wider musical community. As a soloist on the Lord of the Rings and The Hobbit soundtracks he performed at the Royal Festival Hall with the London Philharmonic Orchestra, whilst his commissioned work for the PRS for Music New Music Biennial in 2014 was broadcast live on BBC Radio 3 from London's Barbican Centre and Glasgow Royal Concert Hall. He has performed at the Edinburgh Festival's Assembly Rooms and on Broadway with Riverdance.

Girl with the 'Nut-Browne' Hair is a glorious track with which to open the album. Superb Nic Jones-style guitar is to the fore alongside Luke's rich vocals, delivered with crystal-clear clarity, a testament to the production values of Daniels and co-producer Paul Savage, who was also responsible for the mixing and mastering. Such is the extensive research undertaken by Luke, who quite obviously pored meticulously over such a large anthology "to collect anything which sparked my own imagination", that, on my count, there are six attributable references to source material in this one song alone.

The range of musical elements, in terms of the variety of tempos, rhythms, timbres, dynamics and forms, for example, across the CD is wide, adding greatly to its attraction and ability to captivate. One can enjoy the more upbeat, goodtime bluesy I See the Good in You, the chugging, bluegrass-tinged rhythms of Where We All Must Go, with Luke's deep vocals reminiscent of Brad Roberts from Crash Test Dummies, alongside the similarly jaunty Jim Beam & Brown Sugar, all three of which sound as if they may have emanated from across the Atlantic. Whilst, in contrast, the title track and first single release from the album, Old Friends and Exhausted Enemies, and Officer of my Career both offer a slower tempo, to words inspired by works from nine more poets, and feature some beautiful moments on Chinese Gu Zeng, (harp), from Zi Lan Lao, one of the guest musicians on the release alongside Rihab Azar, Syrian oud, and the South African cellist Abel Selacoe, with whom Luke has been performing as the Kaleidoscope Quartet.

With core musician support coming from Signy Jacobsdottir, (Scottish Ballet), on percussion and Jenny Hill, (Songs of Separation), on double bass, other contributions from Lyle Watt (Blue Rose Code Band) on guitars and the acclaimed Swedish cittern player Ale Carr, plus an additional Irish contingent including fiddler Aidan O'Donnell, The Arco String Quartet from Belfast and The Donegal Abbey Singers, this talented and diverse range of instrumentalists and singers really do elevate Luke's compositions to a higher plane.

A Father's Cradle Song is a beautifully seductive track. Plaintive strings and piano introduce Luke's irresistible vocals, continuing on to create a delicate, weaving sound-scape until, at around 3 minutes 50 seconds in, a change of tempo leads to a jazzy piano break that fades out, only to return, with some perfectly judged percussion.

If this track is beautiful, then at least two others are nothing short of sublime. Firstly The Weed the Wood and the Wagg, delivered in a husky Americana style that recalls Townes Van Zandt; Sir Walter Raleigh would surely approve of the melody to which this poem to his son has been set. Depending upon one's interpretation of the original, would it be too much a stretch of the imagination to suggest that Raleigh's words/Luke's adaptation could be as appropriate to Civil Rights era USA, (or even later), as circa-1609? Secondly, Soldiers and Sailors, delivered in a similar vocal style, defines melancholia in song and music. The sparse accompaniment adds to the overall effect, leaving this listener marvelling at the ability of the cittern, fiddle and possibly guitar to produce such bright brass-like sounds.

The one song credited as "traditional", is The May Morning Dew (Roud 5405). This song, evoking old age and the passing of time, incorporates strings, fiddle and an ethereal choir, in addition to Luke's vocals, and certainly bears comparison with the versions by both Dolores Keane and the Chieftains. I believe that the Welsh have a word, hiraeth, for the deep sense of nostalgia and longing that is expressed so well, by Luke, here in this song.

The album closes as it began, with a track from the top drawer, Prologue to the Canterbury Tale. Here Luke has set a whole passage from Chaucer to music, succeeding, in the process, in creating a three-minute five second gem.

To paraphrase an opening remark, Old Friends and Exhausted Enemies - Seven Centuries of Poetry from Chaucer to Auden is an album of stunning originality and innovation, featuring lyrics and music of the highest calibre. It is highly recommended.

Luke states that "The project has been a study of my own making and time well spent at an important stage in my development as a songwriter. Amidst such creative company these Old Friends and Exhausted Enemies have made me a very grateful student." With this release, he is also an assured teacher - sowing seeds that stimulate further exploration.

Prologue To The Canterbury Tales