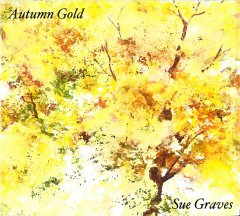 
Sue, I think, is unique amongst my musician friends in that I knew her as a friend before I heard her perform. I first met her around 2005 in, of all places, The National Physics Laboratory. No don't worry, neither of us were there to split the atom. We met in the Sports and Social Club at the NPL. Tony, who ran the club, often put on musical events, and we met in the bar after a Strawbs concert. Sue was introduced to my wife and me by a friend of Dave Cousins, the lead singer of Strawbs. We were told that Sue had an amazing voice, and that she was a member of a band called Soiree, and that we should look out for them. Of course, we assumed that was just hype. He could hardly have introduced Sue to us by saying, 'this is Sue, she's an adequate singer' or 'best avoid Soiree, they're useless' whilst she was standing there.

So stupidly, we made no attempt to look out for Soiree. Then one day we were at a Brian Willoughby and Cathryn Craig concert and Sue, like us, was in the audience. When Brian and Cathryn played "Two Hearts", Sue joined in and everyone's jaw dropped in astonishment. She wasn't just singing along, she'd managed to pick out some complex harmony. Generally nowadays, if Brian and Cathryn are playing at a gig where Sue is around, they will call her up on stage to sing with them, she is that good. After that we had to go and see Soiree.

I once heard Sue being interviewed on the radio. The interviewer asked her where she had been trained to sing like that, expecting an answer such as 'I studied in Barcelona under Monsterrat Caballe' or 'I was adopted by Marie Callas', but was stunned when Sue told him that she'd had no vocal training at all. Her voice is just completely natural.

Sue seems to have an amazing ability to know just about every song that she's ever heard off by heart. I'm lucky enough to live in an area where there are several folk clubs, and Sue is a staunch member of them all, so I've often heard her performing floor spots, and it is rare for her to sing the same song twice. Her repertoire is huge, so deciding which songs she would play on "Autumn Gold", her debut album, must have been tricky.

Sue's latest band, Suntrap, recently recorded their new album "Northern Lights" and recorded more tracks than would fit on their album, so two of the tracks where Sue takes the lead appear here. If you like exquisite harmonies, then this album is well worth buying for these tracks alone. Whether by design, or coincidence, the two Suntrap songs are covers of songs by two solo halves of the well known duo, Julie Matthews and Chris While: Julie Matthews's "Thorn Upon The Rose" and Chris While's "Walk The Line". Two beautiful songs performed so wonderfully that I really feel that I need to see Chris and Julie live. Can't believe that they'd be able to do better versions though.

David Gunawardana was not a name I knew until recently, but he was one of the support acts at Twickfolk when Odette Michell launched her new album, and he really is impressive. I think he performs regularly at Readifolk. Sue supported him at his album launch, so it is of no surprise that she invited him to be accompany her on her version of Christine McVie's "Songbird". David plays keyboards on this track and between them, the result is every bit as brilliant as anything Fleetwood Mac produced.

I don't think I'm aware of any other instance where a singer songwriter has offered a song to another artist and then volunteered to sing backing vocals on the track, but that is precisely what Lynne Whiteland did. She is one half of the duo Tudor Lodge. She offered her song, "Souvenirs" to Sue and accompanied her in the studio. The song is about those old things left in the bottom of a drawer that you don't even remember having kept, only to find that when you accidentally stumble across them that they bring back painful memories of an old relationship.

Lynne also joined Sue on backing vocals on her cover of Joni Mitchell's "Big Yellow Taxi". As Sue says in the cover notes on the album, the environmental message is just as relevant today as it was when Joni wrote it.

Like "Northern Lights", Sue's band Suntrap's latest album, "Autumn Gold" was recorded by Tom Evans at his Sussex studio. He, and Sue Evans join Sue Graves on several of the tracks either on bass, percussion, accordion, guitar or vocals, and Sue Evans even accompanies Sue on hammered dulcimer on a couple of the tracks.

One such track is "Dear Someone". Not a song I'd heard of before, and I have to admit I hadn't heard of the authors Gillian Welch and Dave Rawlings either. Checking them out on the internet, they are pretty well known bluegrass, Americana country musicians, but Sue's version of this song about lonliness and dreaming that one day you'll find someone to love, is far from bluegrass - with the Tom's accordion this sounds very much as if it was played in a Parisienne cafe in the 1920's.

The Beatles song "In My Life" is the other which features Sue E on hammered dulcimer. Like all Beatles' songs, it is credited to both Lennon and McCartney, the lyrics were definitely written by John, but the tune has always been disputed, with Paul famously 'mis-remembering' writing the music.

Like Sue, I can recall the Carpenters' version of "This Masquerade", but I don't think I know the original, written by Leon Russell. Karen Carpenter had such an amazing honey-rich voice it is almost impossible to imagine that anybody could hold a candle up to any song that she had made famous, but Sue has no ordinary voice. Sue sings it with such depth you'll forget that Karen ever sang it.

Apparently, when Sue goes to Readifolk, she is often asked to play Carole King's "Will You Still Love Me Tomorrow". I don't think I've ever heard Sue play it live, but then I haven't been to Readifolk, yet. Listening to her version on "Autumn Gold", you can hear why she gets frequent requests.

With such a large repertoire of songs at her fingertips and so many other songs that she is known for: Hoagy Carmichael's "Skylark", Joan Baez's "Diamonds and Rust", Janis Ian's "Joy", to name but a few, and so many other artists she often covers such as Robert Burns, Sandy Denny, Dylan, Claire Hammill, Ralph McTell, and so on and so on, Sue clearly wanted to include more songs on this album. She sums it up nicely with the final song on the album, "Parting Song", by Judy Goodenough: 'And when I'm done with wandering, I will sit beside the road and weep for all the songs I did not sing and promises I could not keep'.

So, the moral of this tale is, when somebody tells you that Sue Graves has an amazing voice, don't do what I did and assume it was just hype. Get out there and listen to her. And whilst you're there grab a copy of "Autumn Gold".