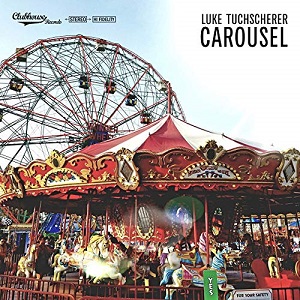 
For many, 'having a plan' can often merely be a pie-in-the-sky wish-list, for Luke Tuchscherer, however, is it a clearly thought out, and thus far well-executed, strategy. Thus 'Carousel', his fourth album in five years, begins the second round in his nine-album plan which sees him releasing albums in cycles of three, a quiet one, a middle one, and a loud one, following the acclaim afforded to his previous full-band rock record, 'Pieces'.

In his sleeve notes for the CD, the Bedfordian singer-songwriter, who is now based in New York City, explains that "ever since hearing The Freewheelin' Bob Dylan, I've wanted to make a solo acoustic record. It had to be live in order to capture that feeling." 'Carousel' is that solo acoustic album, recorded live in the studio, by Scott Anthony at Storybook Sound, Maplewood, New Jersey, in just one day in February this year, and subsequently mixed and mastered by Chris Corney and produced by Tuchscherer himself.

The music has a sparseness and stripped-back feel, and features only Luke on vocals, guitar and harmonica. In addition to referencing Dylan there is an acknowledgement that the work of Elliot Smith, Neil Young and Townes Van Zandt have also informed the writing, all of which is credited to Luke. The song-writing is of the highest calibre, with stories and lyrics reflecting a keen eye for detail across a range of subjects ranging, for example, from socio-political comments through to more personal songs which exemplify both his obvious altruism and devotion to loved ones. Add to this a sonorously expressive voice underscored by appropriately stark instrumentation and the result is an excellent album which fully stands alongside the output of the aforementioned giants.

As the majority of the songs on the CD date back to the mid-2000s it might be thought, especially given Luke's fairly prodigious output, that this album was merely a sweeping-up of lesser quality tracks that maybe didn't quite make the cut on previous releases. That, emphatically is not the case. Each of the songs presented here stand up to scrutiny in their own right.

The oldest song on 'Carousel' is the opening track 'My Darling England' which was written when Tuchscherer was 21. A prescient song if ever there was one, sadly the situations described in the lyrics are as apposite today as when they were written, perhaps even more so in our current Brexit-shambles world. With lyrics such as 'Since when were we afraid of our neighbours? Since when did we bar all our doors? This isn't the place I grew up in, tell me, when did our minds get so small?', this song merits a place alongside Merry Hell's 'Come On England' and Reg Meuross' 'England Green & England Grey', it really is that good.

Tuchscherer's song-writing ability and musical prowess is also evident in two further gems. With 'Don't Let Him Change You', my interpretation is that the song, with barely perceptible guitar and plaintive vocals, is a plea to individuals not to change their own attitudes or beliefs merely to satisfy someone else. The inherent risk of 'losing their spark' or individuality is a price not worth paying. 'The Night Tom Petty Died', one of the 'newer' offerings, could just be the best song that Harry Chapin failed to write. Whilst the title appears to be a slight misnomer, although the 'death of a hero' does indeed feature, the song seems to be more an anguished narrative describing, amongst other things, some aspects of the disruption surrounding Luke's relocation to New York, and the attendant wait to be joined by his wife.

The strength of Tuchscherer's lyric-writing and his ability to write to a wide-ranging agenda is clearly apparent on 'Carousel'. The title track itself, echoed by the sleeve art photography of Coney Island, is the closest the album get to jaunty, whilst political comment pervades 'Potash', a moving and poignant song written during the Iraq war, and 'Violets' is a harrowing song referencing physical abuse, written from the perspective of a fuel forecourt attendant. These latter two tracks being in stark contrast to 'You Still Have My Heart' a tender, uncomplicated love song, I assume to his wife, written only two weeks before the recording, and a fitting track with which to round off the CD.

'Carousel' is an exceptionally good album, from a very talented artist, deserving of wide exposure.