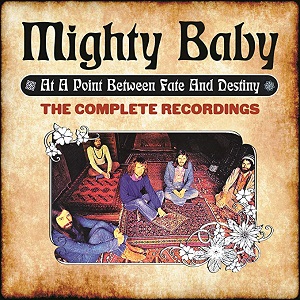 
What an appropriate title for this exhaustive, fully band-authorised six-disc box-set containing everything the band recorded (as far as I know, that's bar its solitary John Peel radio session, which presumably hasn't survived) - for this outfit often seemed poised on the cusp of something big yet fate or destiny invariably stepped in. Mighty Baby was also something of a band of transition, during their brief three-year life-span moving "from mod to odd" via acid-rock, country-rock and improvised mystical-rock - and, unusually for a band of their era, retaining the same personnel throughout: viz. lead guitarist Martin Stone, rhythm guitarist Alan King, bassist Michael Evans, drummer Roger Powell and keyboards/sax/flute player Ian Whiteman. Alan, Roger and Michael had been members (with Alan's brother Reggie) of beat-boom mod band The Action, playing respectable Tamla and soul covers, but encounters with Coltrane, Cream and LSD fuelled an interest in musical experimentation that was clearly incompatible with The Action's strait-jacketed blue-eyed soul. At the same time, mod music was gradually being transformed, through the influence of the American west-coast bands, into acid-rock, and this, combined with the jazzier influences, was the direction in which the reinvigorated Action men were trending - a direction which crystallised when Ian was recruited; Martin was to join shortly after, encouraging the band to embrace a hippie mindset and mysticism, which proved out of kilter with Reg, who departed the band in mid-1968.

Developing the new direction, they took on a new name, Mighty Baby, and launched into the process of recording tracks for their first studio album which, though it comprised thoroughly road-tested material, was unevenly produced. A confusing contractual hassle ensued, as a result of which the album's original acetate was abandoned, most of its tracks were re-recorded (three even sporting substantially different lyrics), and two of its songs (Ancient Traveller and Messages) replaced with three different songs (Egyptian Tomb and brand new compositions I'm From The Country and the somewhat VdGG-like At A Point Between Fate And Destiny), before being finally issued on the obscure Head label. Disc 1 of this marvellously presented box-set delivers both versions of Mighty Baby's debut LP, and both sound pretty convincing - despite band members' claims to the contrary, and despite a few forgivable musical imperfections here and there. I'd go as far as to say that the album reveals itself as a prime slice of 1969-vintage nascent-prog/acid-rock, with strong playing and singing and strong and original - if at times challenging - songs. It was, however, something of an enigma in that while reviews were uniformly positive it (unaccountably) received virtually no radio exposure save for two of its tracks being performed on a Top Gear session in December 1969 along with a relatively brief (eight-minute) account of Coltrane's India that had been a live feature ever since the final throes of The Action.

Luckily however, the hoary old catchphrase "lack of commercial potential" didn't seem to affect the band's ability to carry on regardless, driven deep into the underground and somewhat aloof from other bands on the scene in many ways, yet characterised by a certain hit-or-miss quality of inspiration. The "freedom-with-reference-points" approach informed the recordings for a projected second album Day Of The Soup, which appear here on Disc 4 - and, like the band's debut, these prove something of a revelation. The atypical classical-inflected opening track Winter Passing aside (which featured guest vocals from the Emily Muff duo), the album consisted of a continuously-playing four-part suite that ranged from Moody Blues (Lost-Chord-ish) easternism, steered by tabla rhythms and Ian's flute, through to dreamy sax figures and Crimson-esque chaos, all propelled forward by an energetic, urgent, shifting counterpoint of guitars and tumbling rhythm section. Maybe even this level of underground-style expansiveness would have seemed too esoteric even for the listeners of the time; whatever, Day Of The Soup never saw the light of day, more's the pity, and its experiments prove worth hearing now as an integral piece of the enigmatic jigsaw that was the development of Mighty Baby.

Disc 4's clutch of bonus cuts bring us the audio track from the band's only TV appearance (July 1970 - a fairly routine Keep On Juggin') in addition to three (non-album) tracks recorded at a University gig four months previously which provide evidence of the defiantly loose-limbed, expansive improvisatory nature of their act (and including some particularly impressive drumming by the way) as well as a couple of pseudo-Creedence swamp-thrashes. One can certainly detect the influence of West Coast bands like the Grateful Dead, and as contemporaneous meandersome musical rambles go, I've heard many far worse and more aimless examples.

Around this time, the band members were much in demand as session musicians, and they could be heard on albums by the likes of Shelagh McDonald, Gary Farr and Keith Christmas - a snatch of studio jam from the latter's 1969 session is included on Disc 3, together with both sides of a French/Dutch single and the rehearsal tape for what was to become (in effect) album number three, albeit only the second to see actual release - A Jug Of Love. This more accurately encapsulated the shift in the band's modus operandi, now towards a quieter, more controlled kind of sound and a getting-it-together-in-the-country-fied attitude much inspired by the Byrds and The Band. This rehearsal tape, though basically vocal-less backing-tracks, is nonetheless of interest, with distinct shades of the Dead, and it's worth noting too that one track, the rocking Gram Parsons cover Lazy Days, was dropped from the final album.

The finished LP A Jug Of Love itself (as released in October 1971, interestingly, on Mike Vernon's Blue Horizon label) appears on this compilation as Disc 2. It's a well-rounded and convincing album, with a striking (if mildly laid-back) sense of purpose. For although you could say Mighty Baby was in one sense built around the fluid, expressive guitar playing of Martin Stone, it wasn't ever a "guitar band" in the usual hard-rock sense, and A Jug Of Love intelligently signalled their shift from out of the insular prog-underground towards a more mellow brand of country-rock with often a broader acoustic base sitting alongside the electric elements, while lyrically speaking it was "very much a Sufi album", a "heavily Muslim-ised recording" that emerged from the band's spiritual awakening and an interest in Gurdjieff whose roots lay in Sufism (hence the album's title, a Sufi metaphor for divine love), and not least therefore in the recent conversion of four of the band's five members to Islam. The album was a strange, and mostly convincing, mix of relaxed invention and disciplined recording that perhaps shouldn't have worked as well as it did; suffice to say that the bulk of the LP certainly still sounds musically credible today. As well as the influences of west-coast and psychedelia and rootsy country, there was a willingness to experiment with ideas from all over the globe - there's a brilliant jazzy-Turkish acoustic guitar solo on Virgin Spring for instance - and the whole mix is leavened with an informality and intimacy of execution that's actually very appealing. But despite its charms and positive qualities, the album "sort of crept out, then crept back in again", to almost exclusively negative reviews, and sold badly.Shortly after the album's release, in fact, the band found it "became impossible to reconcile the Muslim thing and the rock'n'roll", and they naturally parted from each other at the end of 1971. (Later, some of them went on variously to become involved with The Habibiyya, Ace and Chilli Willi & The Red Hot Peppers… we learn from the booklet's truly excellent essay, which also benefits from a host of reminiscences from band members and extracts from Ian Whiteman's unpublished autobiography.) On Disc 2, the A Jug Of Love album is supplemented by a clutch of bonus tracks - both sides of the Blue Horizon 45 released just prior to the album including the Burritos-like Devil's Whisper, and the five demo recordings from Summer 1968 that were later released credited to The Action.

Disc 5 brings an audience recording of the band's performance at Malvern Winter Gardens in February 1971, when they shared a bill with Quintessence. Although distinctly rough and lo-fi at times, at least compared with the studio recordings, it contains some exceptional playing and abundant spirit, so its half-dozen tracks are worth hearing and - coupled with the slightly later (June 1971) Glastonbury Festival performance (all of Disc 6 and the final track of Disc 5), gives the full flavour of a Mighty Baby live performance during the months prior to the more focused A Jug Of Love album. The Malvern set contains a typically stretched-out take on India, which even includes a drum solo; this number was fast becoming unrecognisable from its Coltrane source, while the various versions of Keep On Juggin' will probably tax the patience of even the most devoted heads - nevertheless, these two live sets are important parts of the Mighty Baby profile and form essential inclusions in this complete set.

Discographical note: the band's debut album has hitherto enjoyed reissue on BigBeat, and the Disc 3 rehearsal tape has more recently surfaced (on Flashback) as Slipstreams; while the contents of Discs 2, 4 and 5 had previously appeared on Sunbeam - A Jug Of Love in 2006, Disc 4 in 2009 (rather misleadingly titled Live In The Attic) and Disc 5 in 2010 (as Tasting The Life). However, Disc 6 marks the first appearance on CD of a sizeable chunk (around 80 minutes in total) of the band's legendary June 1971 Glastonbury Festival performance (which is rumoured to have lasted for probably three or four hours in all). Although much in-between-songs chatter and tuning-up runs on through the performance, this whole segment also contains the hitherto-presumed-lost full 36-minute version of the jam that had once been India and was now (rather more memorably) titled A Blanket In My Muesli. (Tho' interestingly, the shorter numbers sound more like the (first-album vintage) Dead than ever to my mind, with that primitive organ sound…)

OK, in the end perhaps six discs is too much for one sitting, but it's an impressive tally of work from a short-lived band that burnt brightly if unpredictably and unquestionably deserved better and wider acclaim. And the set's impeccably and impressively packaged too, in line with (nay, surpassing) the high standard we've come to expect from this stable.