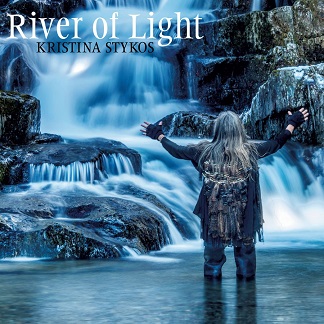 
Appropriately born in the Greek-named Ithaca, New York, Stykos started out singing in Boston with then boyfriend Bela Flek before, following a stint as a cook in Sweden, settling off the grid in Vermont, setting up a not-for profit organisation to promote acoustic music, steeping herself in the regional folk repertoire playing with a vast array of local musicians before returning to a life as a singer-songwriter and also setting up her own hill top studio and record label.

This is her eighth album and comes after being diagnosed with spasmodic dysphonia, a disorder that makes speaking and singing difficult that also afflicts Linda Thompson, hence the raspy, often semi-spoken nature of the songs here, a mix of country, folk, and talking blues that has an intoxicating appeal.

She has a strong poetic sensibility, announced from the outset with 'State Line Diner', a driving alt country number that vocally evokes Lucinda Williams about a relationship in crisis which uses the extended metaphor of women as cars that may be clunkers but still have life beneath the hood as she sings "the day I surrender and lay my chassis down…I'll still be full of livin' 'cuz I ain't done yet."

As the title suggests, 'I Like A Hard Hearted Man' turns to talking blues ("He's a man hell bent on destruction/But knows he can't do it alone") with a classic 12 bar blues guitar riff laid down by Steve Mayone. Her focus then turns to her Vermont mountain surroundings for 'Walking These Ridges', Jeff Berlin on drums and Patrick Ross scraping the fiddle taking refuge and comfort in the 'gold' of nature from false lovers and worldly greed. The setting and its healing and calming properties remains the same for the spoken organ backed slow burn Since You Asked where she chooses isolation amid "the stubble of this earth" rather than "fake my laugh", not shackled "by the issues or the rulebooks of men."

Val McCallum on electric guiter and lap steel, 'At The Edge' lays down a throaty blues groove for another rural vs urban number, facing down the snake-tongued man at the door and ready "to finally heal what drove us apart". As you might imagine, the bluesy In The Cleansing Rain follows a similar thematic Thoreau path ("I want to go where there is no reception/Only tall meadow glass and the sky's reflection").

Featuring Ross on fiddle and cello, 'Caught By The Heart' is a spoken poem with swirling background voices about finding deliverance from an abusive relationship ("don't hit me again") and a lover who's become "a total stranger/Bent on self-destruction."

Opening with resonant acoustic guitar and featuring McCallum's bluesy solos, the title track further pursues the theme of overcoming and escaping adversity, following a highway of snow to cross the borders from pain to redemption, while on 'Breaking Trail', again wounded by lies, she uses the imagery of a horse jumping the fence and flying away.

Redemption's there too on the primarily acoustic backed 'Climb This Ground', the longest track coming with the evocative five-minute spoken poem Waging Peace about finding tranquillity amid the grass, the sage and the river painted with just subtle synth colours and acoustic and muted electric guitar.

She ends with the life affirming, huskily sung and earthy 'Blessed Light' which, Abbe Jenne on backing vocals and Stykos adding flute, put me in mind of the tribal shades of Buffy Sainte-Marie, the final track, dedicated to her father, 'Godspeeed', a moodily sparse bluesy acoustic guitar instrumental set against a repeated piano note. Bathe deep.

Caught By The Heart