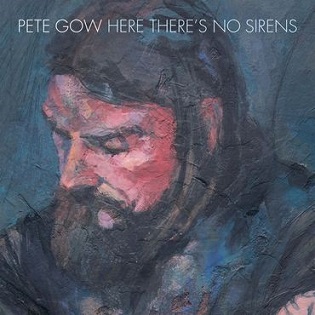 
The frontman with UK Americana outfit Case Hardin, Gow steps into the solo spotlight with this debut release under his own name. Produced by Joe Bennett from labelmates The Dreaming Spires (who also wrote the melody and harmony parts, arranged the horns and strings and played pretty much everything other than the guitar and drums), fans of the band will be happy to know its troubadour approach doesn't stray too radically from the alt-country path, although this is both more stripped back and yet also more orchestral with its strings and brass while the material is more personal and soul-searching in its exploration of relationships.

The changes in his emotional life are laid out with the opening 'One Last One Night Stand', one of four to push past the five-minute mark, a strummed guitar and piano slow waltz that gradually takes on a lusher, organ-backed sound about a doomed liaison that sports the line "We don't need to die here on this beach - we don't need this sand to wipe blood off our hands" and features a lengthy instrumental break.

Despite singing "songs are like tattoos, you should think before you name one after a girl", he does just that with the magnificent slow shuffling 'Mikaela', the Bonnie to his Clyde, which starts out as a simple voice and acoustic strum before organ, strings and brass introduce Mexican colours to the Guy Clark feel, the lyrics weighed down with heartache over a broken romance as he sings "I can't find that tiny brass ring/She said don't worry, it's just a silly thing/But no matter how small,/I can't stand losing part of her at all."

The title track, named in response to a comment I made about "women as sirens to hearts too bruised to care about getting beaten again" in my review of Case Hardin's 'Colours Simple', was originally intended for the band's next album, but it fits perfectly here, its reference to and closing snippet from 'A Rainy Night In Soho' earning a Shane MacGowan co-write credit, the song a melancholic reflection about a broken vow, a broken relationship, self-harm, the heavy silence and the hope of finding a way to fix things as strings and horns sweep in to further splinter the deep dark scars, "hymns to her harm… where her secrets are."

Featuring lap steel, the crushingly bittersweet 'TV Re-Runs' is the most country sounding number, a slow, sad waltz around the honky tonk as "strangers drink and dance to pass away their week nights in the dim glow of these bar lights", Gow huskily singing of "sifting through the wreckage of this crash site of all the hearts left broken here last night" in "one more circle round the sun" as the horns serenade the debris left by the hurt.

At just under three-minutes, 'I Will & I Do', is the shortest and most direct track, a folksy fingerpicked number with decided hints of John Prine, followed by the lengthy enigmatic Paul McLure co-penned story song of 'Some Old Jacobite King', a saloon bar piano backing to its waltzing melody as it unfolds the father's tale of an estranged son gone bad, conceived in the attic of some Scottish island inn and named for his mother's father, a newspaper headline about a bank robbery in the Perth and Kinross village of Bankfoot and the bitter lines "If only the good die young/When will the good ever learn? The codes for the door/Or to get down on the floor when they're told?" and the "walls that now hold him."

It ends with 'Pretty Blue Flower', another number rooted in classic Texas, dust-tinged country troubadour territory which tears you apart as he recalls small but emotionally resonant moments, the titular bloom, cut down at the roadside in its prime, emblematic of a relationship on the brink, Gow singing "you want to jump and that's okay, but first take my hand" before a Celtic-shaded violin sweeps in for the final, dying moments.

There's a new band album scheduled for later in the year, but for now this is effortlessly earns Gow a place among 2019's finest solo debuts, a reminder, were it needed, that he's one of the finest songwriters in the business.