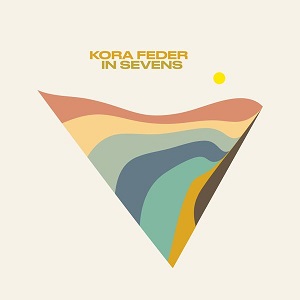 
In Sevens is the debut full length album from Brooklyn resident, Kora Feder. Having spent time with a backpack and guitar living in Asia and Europe, Feder has clearly seen enough of the world to look on modern America with something other than jingoistic passion. Having been musically minded all her life, fiddling since five, accompanying her musical parents from a young age, it's perhaps not surprising to see such a talent express her world views in music.

Having spent time in the likes of China, Thailand and India, Feder has developed a real flair for writing songs about humanity, or in some cases the lack of it. A number of the tracks on In Sevens capture the turbulence of modern life, and reflect well the difficulties and absurdities normal people face across the globe. Automatic Times is the prime example, tackling the weighty topic of gun control in America, and highlighting mass murders that have been met with no sign of change. Child On The Move was written while leading songwriting workshops with stateless youths in Thailand, and it highlights the reality faced by many such young people.

Not all the songs have a political edge. Meditation Song comes from reaching for that blissful state while your mind does its best to prevent you attaining a measure of peace by filling you with self-doubt and world worries. Dance With Me is filled with love and romance, slow paced but full of splendour and yearning vocals. Still We Write covers the artistic reach for poetry and beauty even in times of great strife and uncertainty.

Pick of the bunch is probably He Wants To Live Forever, written for Feder's grandfather. At the age of 92 he is still very much active and engaged in the world, and the song has a real weight and depth to it, while retaining a lightness of spirit. There is something wonderfully hopeful and optimistic about the track, which makes it a very pleasurable listen.

Kora Feder is obviously a rising voice on the American folk scene, and it is good to hear some very important topics being covered. While occasionally she reaches for a poignancy and doesn't quite manage to get there, there is much to admire in her songwriting. The production keeps things simple, keeping the main focus on the vocals and lyrics, and while it could do with an occasional change of pace, this is a very impressive full length debut. I suspect we'll be hearing about Kora Feder for a long time come.