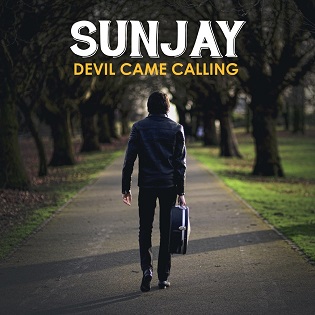 
The fifth album by the Stourbridge-based blues singer-songwriter and the first original material in four years sees a marked return to form after the well-played but soulless Black & Blues and the somewhat pointless Sunjay Sings Buddy tribute to Holly. Here, though, there's far more personality and life, kicking off with 'Ghost Train', a co-write with co-producer Eddy Morton, that, Katriona Gilmore on fiddle and Morton on mandolin takes a wheels rolling journey through a roll call of names from American history, among them assorted presidents, Marilyn, Custer, Martin Luther, Elvis, Muddy Waters and Babe Ruth suggesting the age of real heroes has passed over the horizon.

A co-write with Les Glover and Henry Priestman, 'Too Close To The Sun' is a snaking, almost tribal rhythm blues, Morton on organ and Jennings laying down the throbbing electric bassline, an instrumental break giving Barnes a solo showcase. Chris Smither's 1991 live album Another Way To Find You provides the piano-accompanied moodily slow blues I Feel The Same before, originally appear on his 2007 album Stourbridge Train, Morton's 'King of My Own Country' is reshaped from fingerpicked, harmonica-blowing rootsy Americana into a slightly more uptempo slide guitar chugging blues and a particular album highlight.

Digging back to 1989, Dutch blues legend Hans Thessink's classic 'Johnny & The Devil' (a sort of meeting between JJ Cale and 'Guitar Man'), gets a faithful, but more uptempo, reading, albeit wisely avoiding any attempt to mirror Thessink's gravelly vocals, with a guest banjo from Dan Walsh. Another blues great provides the album's sole instrumental, a showcase for Sunjay's easy, laid back fingerpicking style and foot percussion, 'Mississippi Blues' was written (originally with lyrics and much slower) by Delta blues pioneer Willie Brown.

The superb 'Faith Healer' is a new number from Morton (a seriously underappreciated songwriter), a circling fingerpicked acoustic guitar of a folksier persuasion (hints of McTell and Meuross) with Gilmore on fiddle and backing vocals, the album moving to its final stretch with a drum thumping, harp-wailing boogie stomp through Canadian bluesman Matt Anderson's 'Tell Me', Charlie Barker providing back up as Sunjay's finger fly over the frets. It all ends in solid mist-swirled, soulful Celtic-hued folk style, Sunjay backed by fiddle, double bass and organ on a cover of 'The Truth' by Mississippi blues/gospel singer-songwriter Lisa Mills.

The release of his first studio album, back in 2014, saw him hailed as one of the rising stars on the folk and acoustic circuit. This establishes him in the firmament. Mike Davies