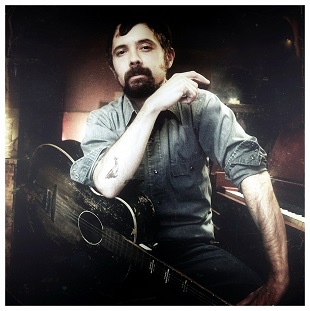 
Born in Vermont and based in Portland, when not making music Hatfield makes sculptures from found objects, preferably ones discarded by others. It strikes me that somehow is an apt metaphor for his songwriting too, crafting songs built on emotions left after relationships end.

Indeed, this album charts a somewhat ambivalent one with a woman, a muse, who, while she doesn't reject him, isn't committed to him either. As he sings on the folksy fingerpicked six and a half minute title track, "You say you like me good as any/But I can't say I'm delighted to feel like one of many." He sounds forlorn, but he's also aware of the absurdity of the situation, hence the sense of wry self-critical whimsy that permeates the songs.

'I Love You Blues' is a case in point, a harmonica laced dusty jug band prairie ramble delivered in a hangdog croaked manner, the song getting a back reference in the subsequent dry-throated,wheezingly sung 'The Day I Cried In Your Car' as he recalls playing a gig with the woman of his longings in the audience and making an idiot of himself afterwards.

'Roll On' lifts the tempo somewhat on a number that conjures inevitable comparisons to Michael Hurley, the witty lyrics complemented by a brief musical departure from the strummed dirge midway. For a man beset by turbulent feelings, he generally sounds overcome by ennui, even when, as on 'Take Care of That Ass, Darling', he mopes about the sex he's not getting anymore: "There's peace within you or without you, but you know what piece I'd rather ride."

Having referred to himself as a lion a couple of songs earlier, he develops things further with, well, 'Lion', in which he comes over all predatory with his sleepily seductive husky purr ("thanks for the ride, come into my den, I want to thank you for the ride with a ride my friend" adding that he doesn't want to complicate things: "I'm not looking for love. I just want to hear you sigh."

Fittingly, it's followed by the closing track entitled 'Sex Addiction', a number very much in the Loudon Wainright vein of humour-laced sadness as, in a song that talks about forgetting to buy cat food, he returns to the fact of his being just one of many friends with benefits and how "I never wished so hard I had a stranger's face." Confessing how he's "starved for your passion" and admitting he wants to screw, it deftly sums up all the contradictory wants and needs in the disarmingly poignant simple refrain "I miss you, but not your sex addiction." One from the margins perhaps, but well worth pushing your listening envelope for.

Lucky To Be A Sadman