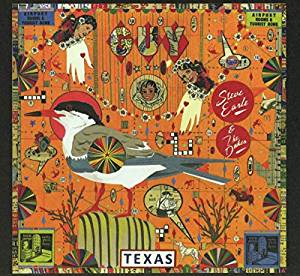 
In a very obvious way, this latest album release from Steve Earle is a companion piece to Townes, Steve’s 2008 album on which he paid tribute to Townes Van Zandt, one of his two primary songwriting influences. The other, of course, being the legendary Texas-born outlaw-country songwriter Guy Clark, who died of lymphoma in 2016 at the age of 74, and whose catalogue of great songs reads like a litany of essential modern country-Americana classics. And similarly, Guy (the album) manages the tricky feat of sounding both entirely authentic in keeping with its inspiration and equally authentic as a strong entry in the Steve Earle album canon. Right from the cracked Red River Valley springboard of 1974’s Desperadoes Waiting For A Train – fourth in the running order here – and LA Freeway, every song’s a winner, and Steve’s choice is both unerring and heartfelt. These are clearly songs he loves, and which he’s gotten fully used to playing – and it shows. And the latest lineup of his Dukes (bassist Kelley Looney, guitarist Chris Masterson, drummer Brad Pemberton, Ricky Jay Jackson on pedal steel and Eleanor Whitmore on fiddle, tenor guitar and mandolin) just couldn’t be a better foil for Steve’s renditions of these songs. Especially, I feel, the half-dozen that originally appeared on Guy’s seminal debut LP Old No. 1 back in ’75.

As background, Steve first met Guy in 1974 when Guy was in his early thirties, and they hung out together till the end. But it’s fitting that he’ll be remembered mostly for the songs he wrote during the ensuing 25 years or so, which form almost all of those covered by Steve on this tribute set (the exception being the 2006 rocker Out In The Parking Lot). Nevertheless, every single number is quintessential Guy Clark, and Steve does them all proud.

If I’m absolutely honest, I’ve never gone much for the semi-spoken narrative songs, but even so I can’t imagine The Randall Knife being covered any better, and Old Friends is possibly the aptest choice of finisher for this project. But most important, after playing through the album’s packed hour’s worth of Clark songs, you’ll appreciate exactly why Steve’s one stated regret in life is that he never wrote a song with Guy, even tho’ he was invited to.