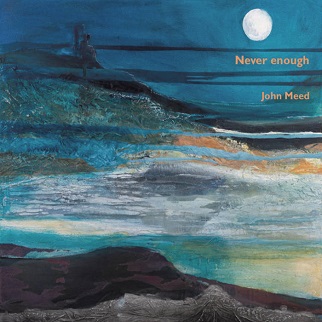 
A Manchester-born, Cambridge-based singer-songwriter whose work has been likened to Al Stewart, Richard Thompson, Cohen and Brel, Meed made his recording debut back in 2005 and this is his seventh album. Co-produced by multi-instrumentalist Rhys Wilson who contributes guitars and keys to several tracks, it adopts a similar storytelling approach to his previous work, opening with the six-minute, piano-led 'Side By Side', a song about travelling companions on assorted bus and train journeys whose paths may or may not continue together that, ultimately,speaks of both commonality and the differences that make us who we are.

Joined by Lucinda Fudge on viola and Matt Kelly on violin, 'Never Enough' is a Cohen-esque fingerpicked waltzer somewhere between 'Seems So Long Ago Nancy' and 'Famous Blue Raincoat' while it's Brel whose spirit hovers over the boulevards leading to the striking 'La Fayette' that, Dawn Loombe on accordion, draws climate of fear and refugee parallels between 1943 France and today's Europe.

There's more musical textures to be heard on 'Strange Thing' with Myke Clifford adding alto sax to a number about the mystery of love, be that the bond between mother and a child, a friendship or a romance.

One of only two tracks to feature drums, 'Why?' has more of a 70s rock feel with its electric guitars, hints of Lennon's influence lurking in the background, while the reappearance of strings brings a calmer reverie to 'Blackbirds' with its lyric about the power of music and human contact to "keep us from going under."

'For Granted' is the album's swelling anthem track with its soaring guitars fading away into the ether, while, Meed solo on guitars and orchestral-styled synthised warm brass and piano trills, 'Mistakes' is an introspective reflection on regrets that extends from personal to national empire building ("reach for the glory, live with the guilt") before it finally returns to France for the ebb and flow of fortune on the streets of 'Bordeaux', a melancholic piano ballad slow waltz with storm sound effects and reference to Gabriel García Márquez's One Hundred Years of Solitude before it builds to a swelling upbeat more hopeful finale as "all that we share comes in with the tide."

Meed's somewhat mannered and dry, slightly flat vocal style could prove an acquired taste, but the rewards are worth the reaping.