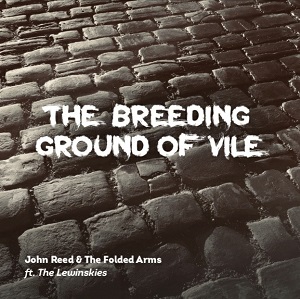 
Born in Blackpool and based in Manchester, the most immediate comparison would be to the city's very own Roy Harper, both steeped in progressive folk with strong muscular musical structures and an equally strong social and political voice. This is his second full-length album and the first with his backing band comprising producer Heygamal on bass and keys, Kieran Heaney on slide bass and electric guitar, fiddler and uilleann pipes player Matt Steady and backing vocalists Emma Perry and Kate Ferris, with Reed himself on cello, guitars and, especially, cittern. They're also joined by Peter Robinson on percussion and The Lewinskies, Kristen and Matthew Lewis, respectively, on accordion and acoustic guitar.

It's a two volume release of fairly unambiguous and uncompromising protest songs about, as he puts it, war, politics and politicians, the environment, corruption in business, the surveillance society, and a lot more besides, and call to take action through standing up for what we believe in, by protesting and, above all, by using our vote and holding those who make the decisions to account.

It draws a fairly black and white divide between the corrupt elite and the struggling, oppressed populace, while the reality is that there are bad and good on both sides of any political or social fence you care to erect, in the same way that the military are heroic when defending right and vilified when the same soldiers are used to break up protests, as, for example, here on 'Send In The Troops', a number about the 80s Miners strike. Likewise, it's always the media to which you don't subscribe that spreads lies, not the one you read yourself. This isn't intended as a criticism of the songs, simply an observation about how rallying resistance works.

Volume 1 is titled Calling Out and opens with 'The Melting', organ introducing a suitably dark and doomy number about how the metal from park benches and railings was sequestered to be melted down for use in the war effort, noting the irony of melting church bells to provide the "raw material for a soldier's living hell."

Many of the songs deal with the oppression of the many by the few and the call to rise up against it. 'Outnumbered', for example, notes that "Just like thunder/We can beat the rain", while, over on Volume 2,The Reckoning, 'The Burning Gates of Hell', a particular standout, notes that while being an armchair activist is all well and good ("You can protest with a button/You can protest with a mouse/You can protest with a touchpad/From the comfort of your house") that won't disrupt the nation like the suffragettes who marched to win the vote, "because fingertips don't hurt/Like the fist of demonstration."

Elsewhere, the suitably furtive 'Surveillance' concerns the creeping growth of a Big Brother society, the angular fiddle driven 'Smash The Machine' is about tearing down state sponsored media while the musically glowering and at times jagged 'Zero Heroes' addresses the iniquity of and the hardship caused by zero hours contracts.

The destructive power of greed and progress, in affecting both the home and the workplace is at the heart of numbers such as 'Fishermen', driven into poverty by "the distant engines of the foreign hulls/That trawl the ocean till their holds are full", the environmental destruction described in the spooked arrangement of 'The Wood' sung from the perspective of trees about to be bulldozes, and the ripple effect of austerity in 'Nine Tenths of the Law', one of the most strikingly Harper-like tracks, where:

There are 20,000 businesses
Whose staff are due a rise
But their 20,000 creditors
Are falling on hard times
The things that they create
Redundant in the store
And the people in their factories
Shown the open door

On a historical note there's also the fingerpicked talking blues-styled 'Rats' which recounts the demise of the canal network and the subsequent impoverishment of the bargees, the water rats, by the coming of the railways. On a similar note, the spare cittern-backed seven-minute 'Dependence' is a lament for the decline of a "once proud island nation that punched above its weight" now " left dependent/At our friends' and foes' behest/On the overseas investors' overflowing treasure chests" having sold off our energy companies and industries.

If these are widescreen stories, there's also more intimate and compassionate close ups. The slow-paced, slightly Celtic coloured 'Wine & Whisky' is sung in the voice of a homeless alcoholic who has managed to kick his heroin addiction but still needs booze as a crutch, and that simply taking that way doesn't address what led him down the darkened street in the first place. Even more poignant is the simple cittern-accompanied 'How Do You Grieve', a song born from a conversation with a software delegate in Kosovo who recounted how, when he was a teenager, three of his uncles and many other men from the village were taken away and shot by the Serbian Army, a song that finds thematic echoes in both 'The Madness' and 'Where The World Is'.

Politicians inevitably come under the hammer, and it's hard not to think of Tony Blair and George Bush as inspirations behind 'Fall' ("Your solution to halting international terrorism/Is to walk hand in hand with unconscious fascism/And to arm to the teeth autocratic regimes/Whose citizens swing for minor demeanours"), the former surely also the subject of 'The Reckoning' ("And when it came apparent/His game was in recession/He slipped from the government/With all of his possessions"), adding Trump ("a philandering bully whose agenda is confused") to the list for the brooding Floydian rock and Eastern shades of 'Not In My Name'.

Interestingly, the overall title track, perhaps more Dylan than Harper, locates the tyranny of the establishment not in the DNA of class or privilege, but in minds desensitised, demoralised and hard-wired for personal gain and the cronyism of "It's who you know not what you know" where the abuse of power straddles the socioeconomic divides.

At the heart of the album, though, is the call to see injustices through to the end (through the courts and the ballot box rather than through violence) and for solidarity in the face of oppression, the album ending with the musically variegated 'Power' (80s rock, progressive folk and even echoes of the chorus to Woodstock) and its simple contrastive "You can…"/"We are…." all come together list lyric as it swells to a chorus of massed voices.

It's a fairly relentless listen with few digressions of musical or lyrical mood, but one that throbs with anger, passion and humanity in equal measure and the conviction that, as Woody said, if we stand together, then we can make a difference.