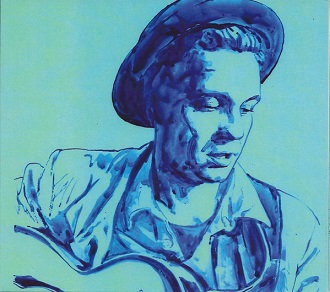 
Martin Stephenson has a career that to date that spans well over thirty years and counting. Perhaps his biggest commercial success was through his first three albums with the Daintees in tow, 1986's 'Boat To Bolivia', 1988's 'Gladsome, Humour and Blue' and 1990's 'Salutation Road', but his enduring appeal and acclaim as a live performer remains undiminished. His music effortlessly covers most genres including folk, jazz, country blues, rockabilly, punk-pop and more and Martin has amassed a catalogue of over 40 albums.

The '30' year anniversary of albums seems a very modern phenomenon with a middle age target audience that remembers the original and may have enough interest and disposable income to buy a re-release or re-working of it. Inevitably, the release is backed up by a tour and the chance of introducing the work to another demographic that were too young for the original. The risk is of course that the re-released or re-worked album may sound great, but after 30 years the act in question just cannot cut it live any more and this experience would intrude unhelpfully on any future listening pleasure!

I originally bought 'Gladsome, Humour & Blue' on vinyl, landed a second hand CD copy for a princely £3.99p after I traded in my records in the early 90's and now have this 30th anniversary copy to review, so I feel something of a completist.

I have listened to a lot of Martin Stephenson over the years but this is the album I return to most and it also contains two of my favourites songs ever written, not just by Martin, but by anyone, 'There Comes A Time' and 'Me & Matthew', but more of them later.

This version of the album is completely reworked and recorded, the only common denominator from 30 years ago being Martin Stephenson as far as I can see. He produces and arranges the songs, is joined by a stellar bunch of musicians that are too numerous to name individually, and it was all recorded and mixed by Stuart Macleod.

On to the album and the first thing to note throughout is how contemporary the recording is, particularly the muscular rhythm section which really propels the songs through and gives the whole thing a marked immediacy and presence. Luckily Martins voice has aged beautifully and adds 30 years of life's gravitas to the proceedings.

Track one, the previously mentioned 'There Comes A Time' is magnificent, Martins brooding vocal sitting perfectly on top of the acoustic guitar and military drumming as the song pushes and builds towards its epic musical climax.

'Slaughterman' is a slower, more jazzy affair with some particularly fine electric guitar in the mix and 'The Wait' is given an almost Mariachi treatment as its strong acoustic guitar part is the perfect counterpoint to the world weary vocal.

'I Can See' is another rhythmically strong song with drums and bumping bass particularly to the fore, 'Old Church' is suitably hymnal and reverent in delivery, 'Even The Night' is stately and austere whilst 'Wholly Humble Heart' is gloriously funked up with its sharp electric guitar and testifying backing vocals.

The sweetly picked guitar of 'Me & Matthew' serves as the perfect underpinning to this bittersweet vignette of a young man and his Grandfather, brilliantly observed and made all the more moving by its complete absence of sentimentality. 'Speak of your life old man, speak of your life Grandfather Matthew, unfold your magic sweet clasped leather palm, for there lies your Baccie old man'. Perhaps ironically, this is the only song here that shows any social age as the average greenhouse Grandfather these days is more likely to be puffing piously on his E- cigarette than rolling a crafty Woodbine! Nevertheless, a truly exceptional song. The dreamy, wistful 'Nancy' paves the way for the half spoken, half sung rolling lyrics of 'Goodbye John' that brings us back to the lounge lizard vibe of 'I Pray', which was the 1988's release album closer. However, in this 30th edition we are treated to an extra song that apparently just missed out on the final cut for the first edition. 'Get Get Gone' was certainly worth the wait, being a swaggering, slyly worded, rockabilly romp that sounds like Imelda May covering 'Poke Salad Annie. If that treat isn't enough, let the track keep running after fade out and eventually we are rewarded with an uncredited, atmospherically dreamy, drone laden version of 'There Comes A Time'. Unless you leave the CD playing through about 10 minutes silence at the end of 'Get Get Gone' most people are going to miss this, so a well hidden treat indeed.

It is clear to see the love and care that has gone into the making of Gladsome, Humour & Blue '30'. It was a great album 30 years ago but here it is bang up to date with fine production and playing and whilst there was never a sense of Martin Stephenson writing songs back then that were too old for him to perform, here it's as though he has somehow grown into them with a depth of feeling that can only come out of a life lived.