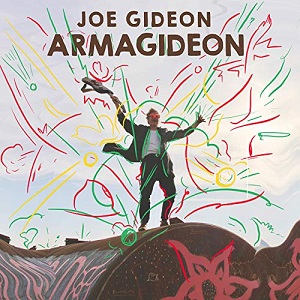 
Many will remember Joe Gideon from the post-rock band Bikini Atoll. Others may have discovered him during his time as Joe Gideon & The Shark (featuring, also from Bikini Atoll, his sister Viva Seifert aka 'The Shark'). I first saw him back in March 2016, in a tiny crypt beneath a pub in Norwich. His band then consisted of Jim Sclavunos (Nick Cave and The Bad Seeds) on drums, and a brilliant multi-instrumentalist by the name of Gris-de-Lin.

Four years later and, in some ways, the world already seems a starker place. Climate change and carbon emissions now dominate the headlines, whilst the pre-existing threats from political and religious ideology still remain. Against this backdrop Gideon, still working with Sclavunos and Gris-de-Lin, chooses what must seem like a gift of a name, 'Armagideon', for his latest solo album. It is the Jamaican patois version of Armageddon, first entering mainstream culture in 1979 when The Clash covered Willie Williams' 'Armagideon Time' for the B-side of 'London Calling'. Their fanzine, Armagideon Times, followed soon after.

Whilst Gideon's debut solo album 'Versa Vice' was essentially a narrative journey that explored twin themes of love and madness amidst keenly contrasted elements of post-punk and reflective tenderness. 'Armagideon' sees Gideon examining a world that now appears to be falling apart at the seams. Opening track 'Expandable Mandible' refers to a friend of Gideon whose prosthetic jaw reacts to changes in the weather. The veiled prediction that 'storm's a-coming' is the cue for a raw jagged groove that heightens the senses and sets out his stall for the following ten tracks. 'Comet Coming Down' is a grim and gritty prevision of doom that starkly counters the primordial bliss of 'The Gaping Yawn'.

Gideon's vocals growl at you as desperation and exasperation float to the surface in equal measure in an alternating fusion of folk-blues and visceral rock. His voice prompts comparisons with both Nick Cave and Seasick Steve, but the essence and spirit of Lou Reed and Jim Morrison are also lurking in the darker shadows. Gris-de-Lin is superb on keyboards and on saxophone, and her backing vocals expose empathetic strata of augmented angst and cadence. Sclavunos possesses an innate ability to summon up percussively the exact same moods that Gideon channels on vocals and guitar, ramping up the tension when required whilst reacting and responding to the subtlest of changes in tone and mood. The result is a perfect balance between rawness and solidarity.

'Scardey Cat' is delivered like a playground taunt from those who still refuse to acknowledge the warning signs, whilst 'Salty' possesses gentle resignation in the face of the mounting tide of evidence. 'Quack No Duck' is a beautiful eulogy to the ignorance of the past - 'You were the Queen of old times, now you're just methadone' is just one of the poignant lines that spill from the pen of Gideon during the eleven achingly raffish tracks on this album.

'Armagideon' stands as an exploration of time, denial and humanity, delivered with a mixture of anger and grace. It never points the finger of blame, but questions our inaction as we scan the skies, or steadfastly stare out to sea for the storm that we seemingly refuse to believe is coming.