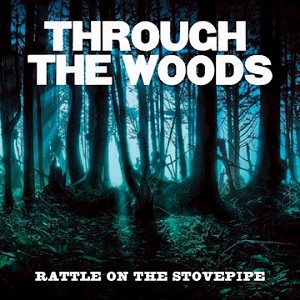 Rattle on the Stovepipe
Album: Through The Woods
Label: WildGoose
Tracks: 13
Website: http://www.petecooper.com/rattle.htm


Released simultaneously with Dave Arthur's compilation of earlier band recordings, this is the seventh album from the West Country string trio that also features fiddler Pete Cooper and banjo player Dan Stewart. Together they make music that celebrates the old time traditions of American folk music, this one kicking off with Arthur singing 'Bootlegger Blues', first recorded by The Mississippi Sheiks in 1930, here top and tailed with the tune 'Wandering Boy'. Perhaps the best known number will be 'Jack O'Diamonds', the deeper-voiced Cooper taking lead vocals, which is followed in turn by a rousing instrumental romp through 'Hell Broke Loose In Georgia', featuring Arthur on shruti box and bones. Then it's all aboard for 'Boat's Up The River', a song about a race between two Mississippi paddle steamers, the Kate Adams and the James Lee in a competition to win the franchise to carry the U.S. mail.

Comparatively more recent, Cooper again on vocals, the mid-tempop 'Gone, Gonna Rise Again' was written by Pennsylvania singer and activist Si Khan, a tribute to his hardworking grandfather written in 1975. It's followed by the second instrumental, a pairing of 'Pike's Peak', 'Tennessee Blues' and 'Beaumont Rag', the latter popularised as a Western Swing classic by Bob Wills.

Keeping things sprightly, 'Hungry Cotton Mill Blues' is an Arthur number inspire by 'A Mill Mother's Lament' by 1920's union organiser Ella May Wiggens who was murdered by five mill strike-breaker employees in 1929. A third instrumental's up next with 'Cora Dye', rooted in a 40s' Tennessee dance tune by fiddler John Lusk, though this banjo led version was learned from Guy Hayes by way of Dan Gellert. There's one further fiddle-led instrumental set, ' Martha Campbell/Yellow Barber', two Kentucky tunes given an Irish-style makeover, while, sandwiched between are the bluesy Depression-themed 'Mama Went Down To Arkansas', a Tom Ovans cover with three additional verses by Arthur, and, Cooper back on vocals, a five minute plus waltz through the often covered traditional 'Lakes of Ponchartrain', learned from Paul Brady and dating from the mid 19th century.

The final two numbers are again firmly traditional. 'Old Bob Ridley' is a British bastardisation of a song, likely of plantation origins, introduced here in the 19th century by the black face minstrel shows from America, the album ending on another black hard labour note with 'Old Hannah', a cocktail of prison camp worksongs 'Go Down Old Hannah' and 'No More Cane On The Brazos', a fine conclusion to an album that ably demonstrates that you don't have to have been born in the Deep South or the Appalachian mountains to keep the sound and history of authentic old time American music alive and vibrant.