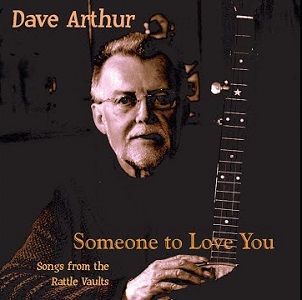 
One of two albums that serve as bookends, originally half of a well-respected 60s English folk duo with former wife Toni, Arthur was also founding member of old timey outfit Rattle on the Stovepipe alongside Pete Cooper and Chris Moreton, and has appeared on all of their seven albums, including their latest, Through The Woods. Arthur's solo album is a compilation put together from the band's vault covering recordings from 2003-2017, traditional numbers with musical and/or lyric rewrites. It opens in jaunty mandolin and banjo style with 'The Gypsy Girl', a Victorian broadside about a woman rising up the social ladder through marriage set to a slower paced versions of Sam McGee's 'Buckdancer's Choice'.

Coming from the Appalachias, 'Bill Dalton's Wife' started life as a poem by Heddy West's father, the woman in question dying in childbirth because her husband was too poor to pay medical bills, originally featured, like the preceding track, by the band on 2014 album Old Virginia. Moving on to 2016's No Use In Cryin', included here are the steady paced banjo an fiddle number 'Red Apple Juice', an iconic Appalachian tune to which he shaped into a commemoration oh his late daughter-in-law, along with 'Short Jacket and White Trousers', a cross-dressing maiden's tale adapted from a version by AL Lloyd, Scottish fratricide ballad 'Monday Morning Go To School', and 'Dillard Chandler',a Dick Connette song based on the reminiscences of the titular North Carolina singer.

Ellen Smith, the band's last release, accounts for seven numbers, first up being a version of one of over 200 different versions of 'Stackolee', this taken at a scampering banjo pace with fiery soaring fiddle from Pete Cooper's scampering fiddle. Equally uptempo is 'Dead Heads And Suckers', Arthur adding new lyrics and a WWI reference to try and give it a little more narrative sense, followed by the West Country cautionary tale 'The Devil's In The Girl', a whaling narrative take on the familiar 'Blood Red Roses', a variation on 20's STD warning 'Black Bottom Blues' and the titular ballad of a 1894 murder.

Moving back in time, their 2003 debut, Return Journey, initially conceived as a one off project, yields their version of the much told and often greatly lyrically varied Northumbrian sororicide ballad 'The Two Sisters' alongside the Appalachian banjo and fiddle waltzer 'I Wish I Had Someone To Love Me'. The remaining two cuts come from the second album, 8 More Miles, the first released under the band name and the last to feature Morton, who left to be replaced by Dan Stewart, the one being the waltzing swayalong sailor sweetheart drowns, girl follow suit 'Father, Father, Build Me A Boat' and the other 'Eight More Miles To Louisville' written and first recorded by Grandpa Jones back in 1946.

If you've been a staunch follower since the early days, there's nothing new here for you, some of the tracks already having appeared on a previous compilation, but if you were a latecomer or newbie, given that the early releases are out of print and stocks of the others are dwindling, this is a great introduction to what you've been missing.

Someone To Love You