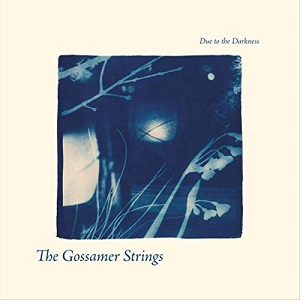 The Gossamer Strings
Album: Due To The Darkness
Label: Self Released
Tracks: 11
Website: http://www.gossamerstrings.com


Here's another duo act who were hitherto completely unknown to me! So let me introduce, all the way from Eugene, Oregon: Kyle McGonegle and Liat Lis, who sing harmonies like a dream team (normally Liat takes the lead part). Instrumentally things are kept commendably simple - Kyle plays guitar, mandolin and bass while Liat plays banjo and guitar - but their prowess is such that they gently convince, in a refreshingly understated and unobtrusive manner.

They write most of their own material, couched in an amenable and directly-expressed old-timey-bluegrass idiom, just one of whose virtues is not to shout or show off but just to display natural easy talent and good honest craft. In which connection, the album's three traditional songs come off pretty well and stand comparison with all-comers - I especially liked their uptempo-but-not-frantic takes on Going To The West and Sandy Boys, but Train On The Island is also a reliable choice and spiritedly done. Back to the self-penned numbers, and Kyle and Liat take their inspiration from far and wide on the American canvas; of course, songs of leaving and break-up kinda go with the territory (Following Through, Wonder Why and opening waltzer She Can't Hear Her Heart all fall into this category), while Try Your Hand (one of two tracks to be additionally underpinned by Billy Barnett on piano) puts a positive spin on giving things another chance. On the disc's title song, a hiking experience in the Badlands forms a suitable metaphor for "the beautiful dark" we have personally to pass through (and out the other end).

The disc also contains a lone instrumental, Big Sky, which takes the basic bluegrass template into more lyrical territory than might be expected at that fast tempo. Which leads me onto my one reservation with this disc - that there's hardly any slower-paced material here. I don't mean to suggest a lack of depth to the duo's music (which, given the "gossamer" tag, might be all too tempting), but sometimes, indeed, the chosen tempos may well feel a touch too brisk for the sentiments expressed. But that's probably a relatively minor concern when the playing and singing are so persuasive - and there's always the repeat button!…

Due To The Darkness is Kyle and Liat's second album release (an even more assured sequel to their competent 2017 debut Lake Toba), and I look forward to their next foray onto CD. Meanwhile, there's a wonderfully relaxed demonstration of the duo's naturally empathetic performance of the CD's title song on a video recorded outdoors in their garden - check it out on their website.

Due To The Darkness