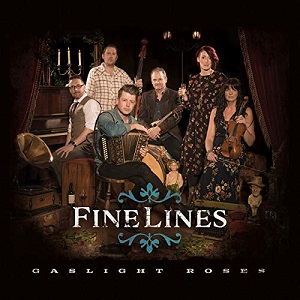 
Gaslight Roses is the second full length recording from Cheshire based Americana band Fine Lines. Their debut was the impressive Hour Of Need, followed up with last year's Forget About You EP, and both of which are compelling and enjoyable listens. Gaslight Roses represents more of a collaborative effort, showcasing the strengths of each member of the band, and with more than half the tracks co-written by David Boardman and Mark Radcliffe.

The new album is a slow burn, enticing the listener in without coming on too strong too soon. On The Town is a great upbeat opener with Boardman's vocals taking centre stage, and Meet Me At Kiki's is a toe-tapper of a track. Of the early tracks, Paradise (Here & Now) is a real highlight, Zoe Blythe taking the lead on the vocals this time. It's the kind of song you'll find repeating in your head at random times.

The second half of the album begins with a familiar song, Begging You having appeared on the Forget About You EP, and is a bluesy treat. Who Do You Love is the other song from that release that finds a home here, closing out the album in a wonderful languid style.

Pick of the album perhaps is the wonderful No Shangri La, leaning heavily on the rock elements which almost demands to be listened to with a bottle of American beer in your hands. My Time Again is another great track, a little more laid back, but no less memorable.

Gaslight Roses is a very strong follow-up to a very strong debut. It straddles that line well between moving on and evolving from what they produced previously, without losing that essence that makes them recognisably Fine Lines. This album is a huge amount of fun, like a party you will want to return to time and time again. With a record this joyful, you can well imagine how great they must be to see live. Roll on album number three.