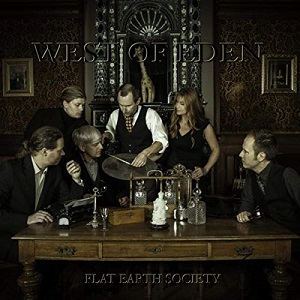 
West Of Eden is a Swedish folk/rock band with a real Celtic feel and influence in their music. My first thought on first hearing this new CD was that it reminded me of Pentangle at times. Jenny Schaub most definitely has that similar ethereal sound to her voice as Jacqui McShee possesses.

There is no doubt that unless you knew that the band emanated from Sweden, you would never guess it. The Celtic musicianship is outstanding and the vocals just ooze pure class. Mental images of The Emerald Isle are brought to the fore.

Flat Earth Society is the band's ninth album amply demonstrating both their versatility and the longevity. This latest album includes a number of outstanding guests including Heidi Talbot, Damien O'Kane, Jarlath Henderson, Duncan Chisholm and John McCusker. When combined with the six members of the band, the end result is a joyous celebration of Celtic flavoured music.

Whilst ten of the tracks on the album are vocals, sung by a mix of the band and the guests, two of the tracks "Isak/Doris" and "Rowbotham's Map" are both instrumentals and sound as though they have been recorded in an Irish pub, such is the Celtic feel and sound of the music.

I was interested to read that the band recently had a very successful tour in China. I have no idea what the Chinese will have made of the lyrics but it is an endorsement of the band's musicianship that they appear to have gone down a storm.

Perhaps it is my Irish roots that propel me towards this genre of music and smother me with a welcoming glow. Jenny's voice, in particular, is outstanding and so perfectly suited to the warmth of the gentle sounds of the band's instruments. A melodious combination of music and lyrics coming together in perfect symmetry.

Of the twelve superb tracks on offer here, my two favourites are the title track "Flat Earth Society" and "Pretty Please" both of which, to me at least, seem to best suit and portray both the band's musical skills and the songwriting ability of Jenny and Martin Schaub.

A delight from the first note on the opening track to the final note on the closing track, this album is a model of enchantment and worthy of being played continuously whenever you feel the need to be smothered in a warm cosy blanket of music.

The Heart And The Tail