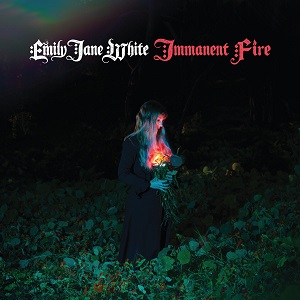 
IMMANENT FIRE, Emily Jane White's sixth album is a huge, shout of an album, grappling with life on a planet on the edge of destruction, lyrical and sonically it is an unblinking vivid experience. Recorded in Emeryville California, this is the sound of urban sprawl and high rise twelve lane decay not orange groves, cloudless blue skies and surf music. Background dinner party music it is not. The cover has a kind of Stevie Nicks vibe, but this is the post apocalyptic child of Rhiannon and Gary Numan or Grimes.

"Surrender" rises from wind noise like a huge slab of atmosphere, voice and guitar hewn from the weather. This is a perfect headphone album with Emily Jane White's stunning voice right between your heads. That voice has a smoldering intensity, think Daughter, Ex-Re and that 80s 4AD This Mortal Coil sound. "Surrender" is a moody torch song opener, "Drowned" maintains that intense focus, but there is a Poppy Classical edge, the tempo and swoops of Emily's voice put me in mind of Agnes Obel. "Infernal" uses a "Oh Superman" like vocal sample to create the initial rhythm while vast slabs of guitar and electronics crash and thunder around it. The effect is totally arresting, think gothic guitar Enya with a cinematic soundscape that envelopes you. This is crying out to be credits soundtrack music in a Marvel blockbuster. "Washed Away" has a Psych Folk feel, picked guitar and funeral drum beat and lyrics that hint at dark escape and freedom or loss of individuality. Fans of Agnes Obel at her most Valkyrie will enjoy this and the wonderful vocals and electronics of this track and "Metamorphosis".

"Dew" with a solo piano and wind percussion dials back the layering if not the intensity. Emily's voice is captivating throughout this track and the whole album, gaining an almost supernatural quality as the electronics build and fall to a minimal keys and bass noir jazz. "Shroud" is expansive from the start, cinematic even with a choir of voices, rich lyrics and Dead Can Dance messianic drum beats and voices. "Entity" features a sinister string section, like the soundtrack to a dark dance. Emily's lyrics are vivid and sinister, cellos rumble, string like electronics stab building a Kate Bush like atmosphere. "Light" thunders with huge drums and a choir of a million voices. "The Gates At The End" has a other worldly quality, the percussion sounds like a huge skin drum, there are hints of atmospherics and Emily Jane's voice glows and burns, filling your ears siren like whether she is the only noise or so loud the blood pounds in your ears and you feel it on your temples. This is singleminded uncompromising music, not that it is a difficult listen, rather that it is at 13 on the emotional Spinal Tap Amp dial of emotions, unashamedly running across a crowded park shouting loudly and demanding your attention.

Emily Jane White has been on my huge wants list of albums since the Mazzy Star Americana intensity of Dark Undercoat and Victorian American. In the years between then and now her sound and musical palette has grown, darkened and matured. Credit to EJ White and the always interesting French Talitres label.