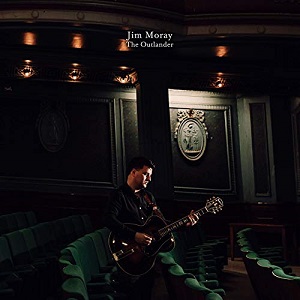 
Over the course of six solo albums thus far, Jim's been at the forefront of reimagining traditional song, invariably at the more musically accessible end of the spectrum but at the same time nowhere lacking in imagination or insight. Some of his albums I've got on with better than others, I'll admit, but the core values of integrity and understanding have always shone through the occasionally less than completely penetrable screen made up of elements of popular, populist or generic expression.

Jim's last album Upcetera, was justly widely acclaimed, and I have a strong feeling that his seventh, The Outlander, will meet with a comparable reception, notwithstanding the undeniable fact that its modus operandi is quite different from its predecessor, in that it's a "simpler" (I use that word advisedly!) and more directly communicative album based around live studio performances and utilising what a majority of listeners would regard as almost-traditional folk arrangements.

The new album's key inspiration can be traced to Jim's purchase of a vintage 1949 Epiphone Triumph archtop guitar that had lain untouched for forty years, and his realisation that it was possible to play in the percussive English folk guitar style on an electric instrument (and how! - for here Jim's playing is a model of ingenuity and sensitivity). And although this model may not seem a natural choice for folk - it crops up more often in the blues/roots domain - it turns out to be a natural accompanimental vehicle for Jim. The instrument gives a particular flavour of the expansive, almost widescreen to Jim's personal takes on his chosen material, and yet there are also tracks on which Jim picks up his 1950 Gibson L50 or 2017 Atkin OM37, to similarly captivating effect.

In order to reinvent the familiar, proven "folk guitar & fiddle" format, Jim recruited Sam Sweeney to join him in the studio, as "someone else to bounce off, and maybe shape the arrangements in real time", and this new simplicity displays a clear lineage to the classic albums of the folk revival, all the while delivering a fresh-minted perspective on a batch of ten mostly very well-known traditional titles. The other principal noteworthy feature of The Outlander is its wonderful sonic attention-to-detail - always a hallmark of Jim's albums, of course, but if anything even more clear-sighted here with the crisper, more limpid textures and drum-less inclusive rhythmic impetus (provided where necessary, as on Bold Lovell and Jack Tar, by handclaps). The extra musicians - Matt Downer (double bass), Nick Hart (concertina, melodeon), Jack Rutter (acoustic guitar), Tom Moore (violin, viola) and Rory Scammell (hurdy gurdy) are admirably sparingly used too, and textures never feel cluttered.

Jim provides succinct liner notes on the songs, and gets bonus points for crediting his sources; here we discover that he first heard both Australia and When This Old Hat Was New sung by Chris Foster and he learned The Isle Of St. Helena from Steve Turner, while Bold Lovell was learned from the singing of Roy Harris and The Bramble Briar from Ewan MacColl (the latter is characterised too by a subtle and sparing use of playing and generated effects). In contrast, the joyously swinging "communal" version of John Barleycorn which Jim adopts here derives from a Lincolnshire seasonal variant. But almost certainly the album's biggest success is Jim's satisfyingly expanded version of Lord Gregory, here done as a delicious duet with Josienne Clarke.

Finally, it must be remarked that Jim's own distinctive vocal tone, light and accommodating, allows him to make his own expressive decisions, while in more purely musical terms, Jim's apparent lack of overt radical boldness here instead proves somewhat deceptive too. Thus The Outlander proves a pleasing new entry in Jim's canon of albums, presenting 45 minutes of typically thoughtfully reimagined traditional song that can't in any way frighten the horses - and nor does it need to.