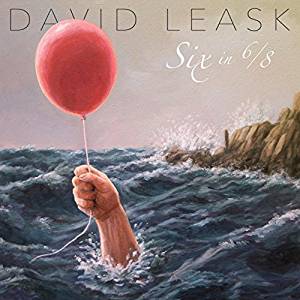 
An ex-pat Scot now based in Toronto, Leask has made quite a name for himself in his adopted country, trading life as a financial adviser for a career as a singer-songwriter, notching up five albums and a stack of awards along the way. This is his sixth release and, as it would suggest contains six numbers all in 6/8 time, the music steeped in a mix of Celtic and Americana influences.

EP opener 'Indescribable' is a love song waltzer, but it's as a storyteller that he's at his strongest, case in point being 'Red Balloon'. Given Celtic colours by Loretto Reid on flute, whistle and concertina with added dobro and accordion, it's a cycle of life story about a woman who, when faced with the end of a relationship and a parent's passing, remembers her mother's words to "let it go, let it fly" when she lost her balloon as a child.

Likewise, the cello-adorned 'Can't Make It Back Home' is ballad about a veteran, "a ghost of myself", unable to adjust back into society because of PTSD, while 'Between Him & Me', written over 16 years, addresses religious intolerance. Musically, it doesn't stray from its comfort zone of melodic ballads, but Leask's warm, catch in the voice vocals, soaring on the choruses, keep you engaged, the loneliness-themed 'When You Think No One Loves You' given a sparse piano arrangement and, arguably the strongest track, 'Caught In The Tide', about finding the strength to swim and not sink when you're in over your heads and looking for a lifeline, leaning more towards country soul. He's little known outside of Canada, but this is a persuasive argument for spreading the word.