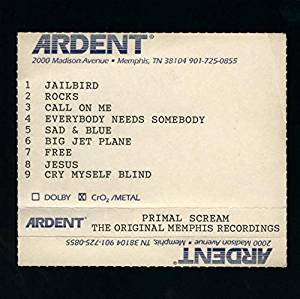 Primal Scream
Album: Give Out But Don't Give Up: The Original Memphis Recordings
Label: Sony Music UK
Tracks: 25
Website: http://www.primalscream.net


Savaged (unfairly, unnecessarily) on its release in 1994 Give Out But Don't Give Up was dismissed as banal, pedestrian and slavish by critics who couldn't find the groove. It's not like the clues weren't there on its illustrious predecessor (Damaged anyone?), but its greatest crime was undoubtedly not being the 'Son of Screamadelica' and because it wasn't the record the newly 'on-one' hacks expected they tore it to shreds. That the Primals were photographed in leather trews only added to the critical mauling afforded it.

At this distance, GOBDGU looks like the record Primal Scream had been longing to make for the thick end of a decade before. Never the most convincing iconoclasts, the band revelled in music history, they didn't care if it was Sex Pistols or Percy Sledge, they genuinely loved great records and gloried in elbowing a space for themselves in a rebel continuum that took in Marley, Lee Perry and Frankie Knuckles as much as the Clash, Iggy, Bolan, Bowie and the MC5.

The original GOBDGU, with its overtones of 1970s southern boogie and funk interludes, was a crash course for the ravers in dancing to nobody's tune but your own and hang the consequences.

What had been forgotten though by the time the album came out was that it was rescued from sessions in the legendary Ardent Studios in Memphis with producer Tom Dowd at the controls and the original Muscle Shoals rhythm section of David Hood (bass) and Roger Hawkins (drums) in tow. To some the marriage of fine upstanding prime southern soul credentials and Glasgow's most dissolute band of caners seemed like sheer folly, but it happened and at long, long last here it is.

Dug out of Andrew Innes' basement, the songs all subsequently surfaced on the eventual album but where the band had decamped to LA and with producer George Drakoulias re-recorded most of the parts to create a record that fit the times, this is the source material, the soulful lodestone that time almost forgot. Hearing the tracks again made everything right according to Bobby Gillespie, he felt redeemed.

Standout tracks like Rocks and Jailbird have been cornerstones of the Primals' awesome live set for years, but hearing the raw incarnation of 6:8 soul ballads like Jesus, Sad & Blue and Everybody Needs Somebody reveals a depth only hinted at in the previously released versions. Cry Myself Blind is a heartbreaker, Free should have been gifted to Aretha and Big Jet Plane has a majesty that was mixed out of its glossier relation - and is that a banjo in there? I think so.

That the band and Creation boss Alan McGee subsequently ditched the nine songs they completed at Ardent is barely conscionable, particularly when you hear the heart of the band at work in the studio out takes and sprawling jams that make up the second disc.

One such session gives way to a stand up reading of To Love Somebody, while another coalesces around Gillespie crooning Blue Moon of Kentucky and Trying To Get To You. Throughout, the guitars of Innes and Throb are discharged with a feeling that's only matched by Duffy's at times astonishing piano and organ turns.

It may not have made the scene in 1994 with Oasis taking off and Creation establishing the high court of Britpop, but these Memphis sessions are sure as hell stating their case today, baby. Listen up!