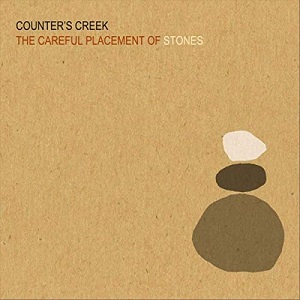 
I remember one summer in Ibiza, lying on the beach at Es Cavallet and watching a group of people building rock stacks at the water's edge - vertically balanced columns of pebbles of varying shapes and sizes. I had a go myself. The process is simple, and is both satisfying and relaxing. By carefully selecting the right pebbles, the stacks can bring together a variety of colours, contours and textures, all carefully arranged to create one harmonious structure.

'The Careful Placement of Stones' is the debut album from London based quartet Counter's Creek. It brings together jazz pianist (and member of leading tango ensemble, Tango Siempre) Jonathan Taylor, violinist Tom Newell (founding member of folk trio Effra), guitarist Moss Freed (from jazz-punk band Let's Spin, and also jazz collective Moss Project), and drummer Andy Tween (who has worked with numerous folk, jazz and pop musicians, as well as with choreographer Michael Clark). Counter's Creek is named after a stream that once flowed from Kensal Green and into the Thames. Like many of London's 'forgotten' rivers it has since become incorporated into London's canal and Victorian sewer system, but remaining an imortant part of the city's underground infrastructure.

Listening to this album reminded me of those rock stacks in Ibiza. Each of the twelve tracks has been created by bringing together distinct individual facets of shape and form, and by balancing and arranging them together to create a unique musical structure. Taylor himself compared the writing process to placing stones in a Zen garden - the various elements must be selected and combined to create an apparently natural and organic composition.

The result is a collection of highly original tunes that feature strong elements of jazz and blues, but also incorporate a keen sense of swing as well as bursts of both East European and African dance energy. But, essentially this is a contemporary folk album with melodies inspired by locations throughout England, Wales, Scotland and Ireland. These include the gentle 'Ullapool' from the Scottish Highlands; Celtic rhythms of 'Caer Llan' from Monmouthshire and 'The Ballymagarvay Wedding' from County Leath in Ireland; and incorporating a dichotomous beat that was inspired by the village of 'Once Brewed, Twice Brewed' in Northumberland.

Further inspiration comes from the nation's capital city. 'Fish Out of Water/The Walthamstow Reel' is an ironic, but spirited, reaction to hipster migration into districts of North East London; 'First Snowfall/The Lord of Misrule' is a wintry flashback to London's first daytime snowfall in five years, as well as a traditional celebration of December's Feast of Fools. Even the salubrious riverside community of 'Richmond' is celebrated in a curious tripling that juxtapositions it alongside 'Fidel's Farewell' (written on the day of Castro's passing) and 'The Path of Least Resistance'.

Whilst the skill mix of this talented quartet cannot be overstated, special mention needs to be made of Taylor's charismatic whistle playing, and of the rich sonorous tones emanating from Newell's octave violin. The Careful Placement of Stones is probably the best jazz-folk album that you will hear this year. I fervently hope that the busy schedules of the four individual cornerstones of Counter's Creek can somehow be arranged together for a live tour some time soon.