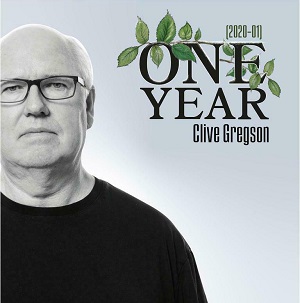 
Simultaneously winding down and gear up, this year sees Clive embarking on his final solo tour of travelling from gig to gig by himself in the car but also releasing a new themed album every month, variously featuring rock and roll, guitar instrumentals, rockabilly, songs about the north of England, love songs, and so on.

The first of these is an almanac with a song titled for and about every month of the year, kicking off, fairly obviously, with 'January', a slow march-paced number with Richard Thompson echoes about life transitions that sees him on peak form as he sings about how "new years having a habit of misplacing some old friends". The tempo picks up for the infectiously jaunty harmonica-coloured, rootsy flavoured 'February 29' about things past and things lying ahead, there's even a hint of a jig about it. March blows in on slide guitar and banjo with its driving rain and howling wind bringing the blues (emotionally and musically), then it's time for an 'April Turnaround', a terrific piano ballad (still raining) birthday greeting to Buddah that, another song about change, asks "Don't you ever wish it was who you are and not who you know?"

Again sporting some shimmering guitar work along with a circular drum pattern, 'Mayday, Mayday', as the title suggests, is a bit of a call for help in an uncertain relationship ("won't you tell me where I stand") and then along comes a drum machine for the laid back lilting calypso of 'June Bug' a song which, in another existence, Harry Belafonte would have snapped up.

The turning of the year ("already half gone") begins with the languorous fingerpicked country blues 'First Day of July' which, as you might imagine, concerns the way time seems to go faster every year and a wish to stop the clock.

The musical mood shifts as organ sweeps in and bluesy electric guitar solos on the tenderly reflective 'August Anniversary' before autumn sets in and change threatens again ("the way things are can't last forever") with the plangent piano notes of the sublime 'Late September,' a number that ranks up there alongside such Gregson greats as 'Home Is Where The Heart Is' as he sings "Best prepare for heavy weather/and live in hope of better days". Then, before you know it, 'October's Here!' arriving in mid-tempo rocking style with twangy guitars and a flurry of drums, a number in the musical vein of 'Turn Ugly Overnight' and 'My Kind of Girl'.

The nights draw in with the relaxed dreamy shuffle of 'November Stars' ("lighting up the back room of my heart") before it ends in December with what else but the seasonal sentiments of 'Another Christmas Song' encouraging you, "from Bethlehem to Lancashire", to "raise your voices, sing along" , albeit tinged with a bittersweet note on "I slip downstairs to empty table, vacant chairs/The ones I love left me behind, so I share this day with all mankind" before the new year arrives and you can play it all over again. If you wait a few seconds at the end you then also get a couple of snatches from what I presume are demo versions. Quite simply, one of the best albums of his career.

My Kind Of Girl