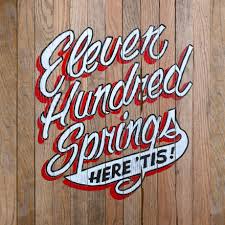 
The music world is a big place, but even so, it's hard to believe I've never come across this North Texas outfit before, especially given they've been going for 22 years and released 11 albums. Founded by guitarist/singer Matt Hillyer and bassist Steven Berg and now also featuring Chad Rueffer on guitar and vocals, Ray Austin on pedal steel, fiddler Jordan Hendrix and drummer Christian Dorn, they trade in old time country of a Bakersfield persuasion, Hillyer's crooning twang having the same warm appeal as Raul Malo.

Things kick off with pedal steel and fiddle leading the way on the descending chords of the George Jones-inclined 'This Morning It Was Too Late', the singer waking up to find his lover's done a runner. They frequent the honky tonk on several occasions, crying in the beers with 'The Song You'll Never Hear' (where Hillyer briefly slips into a falsetto) while both the bouncy 'All Jokes Aside' about "the aches and pains of making memories" and indulging in the whiskey and the wine taking a toll and 'Looking Back' nodding to their life as a band when they "did the gig no matter what it paid".

They never stray far from the established core sound, though, with its brushed drums and steel, Fair Weather Friend and the fiddle dancing 'Let Me BeYour Man' with its twangsome guitar solo hark to 30s Western Swing while the chugging 'Miles Apart' has bluesy shades. But that's observation rather than criticism, rather like going down to your favoirite bar knowing they won't have changed the beers but might have a guest on tap in case you fancy trying something a little different between refills.

They end with, the jaunty rhythms of 'Nobody Cares' which, with its playful jab at those who insist on posting their every thought on social media and the obsession with appearances, is their contribution to contemporary social commentary.

There are, doubtless, dozens of other country bands out there most people have never encountered, playing similar music, but, for now, let me ensure these aren't songs you never hear.