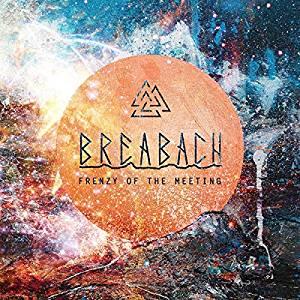 
From their first debut album back in 2007 to today, Breabach have blazed a trail of musical excellence and innovation that now spans a fantastic 6 albums. Each one has seen the band grow and develop a musical sound that is uniquely theirs and instantly recognisable. Featuring the distinctive vocals of Ewan Robertson, Megan Henderson and Callum MacCrimmon, alongside the instrumental skills of James Lindsay and James Duncan Mackenzie, Frenzy Of The Meeting is the spectacular next instalment from a band that are inspiring to listen to and electrifying to watch.

With an atmospheric introduction, Mackenzie's tune Prince's Strand is a lyrical tune inspired by the history and beauty of Eriskay. The organic feel of the arrangement lets the smooth melodic line grow and the introduction of the pipes later on lifts the music up before it segues into Knees Up by Callum MacCrimmon. This intertwines with a beautiful original song featuring the crystal clear vocals of Megan Henderson. The interaction between the intricate passagework of the reel and the slower melodic line of the song is a fantastic piece of arranging that is incredibly effective.

Breabach have always mixed traditional and original tunes and this album is no exception. The lilting Western Isle Dance was sourced by James Mackenzie and matches perfectly with James Lindsay's The Round Earth Society. The slower pace and gentle bounce to both tunes is a nice contrast to the other tracks and features some lovely harmonies between the fiddle and whistles which are emphasised by the contrasting tones of the instruments. The Oban Ball is a cracking set marrying traditional and contemporary perfectly. The band give traditional tunes a very modern feel when they arrange and write with a strong sense of tradition in their own tunes, creating a coherent whole that encapsulates the constantly evolving nature of traditional music.

It's normally the instrumental tracks on albums that really capture my attention but this time it's songs that were standout tracks. Winter winds by Callum Macrimmon is a beautiful reflective comment on change and the passage of time. The gentle arrangement really suites the lyrics which are hopeful and uplifting as well as thoughtful and contemplative. The instrumental elements are subtle and understated, complementing the vocals without overpowering them. In contrast, Birds of Passage has a soaring, almost anthemic quality. Starting from a murmuring introduction that calls to mine flocks of birds, the vocal line rises, lifted further by the added vocal harmonies that are then joined by instrumental countermelodies. The closing track of the album is a beautiful version of Óran Bhràigh Rùsgaich. A haunting melody that suddenly blossoms at the end to finish the album with a flourish.

Breabach consistently produce excellent music that is played with passion and this album is no exception. A group of phenomenal musicians that have created yet another incredible album to share their passion with their listeners.