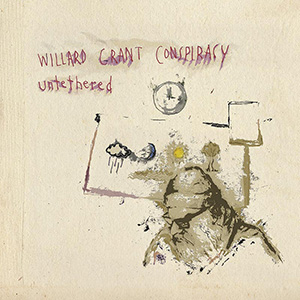 
Sadly this is the final album from one of the most intriguing, inventive and compelling bands whose first release in 1996 was recorded before they even had a name.

They got a name, a very distinctive one, Willard Grant Conspiracy, and at its core, a constant, majestic presence in an ever-changing line-up, was the huge talent that was Robert Fisher who died in February 2017.

Untethered contains Robert's final recordings, 14 tracks in all, the last track is a near six-minute, instrumental potently titled, Trail's End that sounds as if it was played with a sandstorm swirling round the studios. Robert's trusted and long-time musical collaborator, David Michael Curry didn't want the tracks to gather dust on a shelf so he set about bringing them to life.

Foremost in his mind was "a growing sense of needing this record to honour the history of the band somehow." This may not be the easiest of albums to listen to but, no matter, it is certainly an absorbing and powerful reminder of the quality of music WGC and Robert Fisher offered up over 22 years on albums and live. This is why we found him so endearing and that never wavers as this record unfolds for us.

Robert has brought some real gems to Untethered - Do No Harm is a solidly languid, typical Robert Fisher song that wraps itself tenderly around you while Love You Apart is wonderfully warm with light-touch vocals, acoustic guitar and bass leading us into the song. Have to admit my eyes filled up listening to this glorious track with an image of Robert seated at a mic and hunched over his guitar.

David Michael Curry's viola floats and twinkles throughout the aching beauty of Saturday With Jane and Robert's vocals glide effortlessly, a gripping quality evident throughout his career.

Title track, Untethered is quintessential WGC, gorgeously crafted and delivered slowly and deeply without any fuss, just sheer class. "Take the last train to the station / Keep my eyes open while I can / Hope we get back home by morning / See the sunrise on the desert once again," Robert sings, recognising his fate with a dignity and honesty that is humbling.

The album has three studied, calmly deliberate instrumentals in addition to Trail's End but, in contrast, on the terrific opener, Hideous Beast, Robert really lets fly. This tousy track hurtles from the speakers and, with its insistent beats, it brought The Fall to mind though the lyrics are not unintelligible.

This last WGC offering's contributors include Steve Wynn and Chris Brokaw but David Michael Curry alongside Robert Fisher steadfastly hold it all together. The overall result is engrossing, intense, brooding but worthy of being described as a legacy album with lots to revere and admire.

WGC and Robert Fisher leave us thoughtful, appreciative and smiling quietly to the end with our own memories of a true one-off.