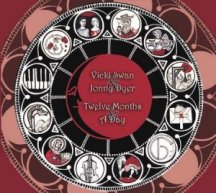 
Shocked to discover that it is four years since I last saw Vicki and Jonny perform as a duo. Of course I saw them at Cecil Sharp when Daria Kulesh launched her album "Long Lost Home", and am looking forward to seeing them again when Daria launches "Earthly Delights". Jonny, I have seen many times when he has played with Daria, but I am definitely long overdue for another Swan and Dyer gig.

If you haven't yet seen them live, it is an almost certainty that even if you are Simon Rattle or Andre Previn and know every instrument in an orchestra, that these two will play instruments that you have never heard of. They are almost complete masters of anything that plays a note. For instance, on this album alone, Vicki plays a standard nyckelharpa, a fiddle nyckelharpa, an oktav nyckelharpa, a Stena nyckelharpa, a flute and a double bass. Jonny plays a guitar, a bouzouki, a piano, a harmonium, a citole, a cornu and a carnyx! Vicki is also well known for playing various types of bagpipes. They don't just play such a variety of instruments for the sake of variety or because they are showing off. They play them because they make the right sound for the music and because they passionately believe in promoting these lesser known instruments to a wider audience. They also play them brilliantly too.

"Twelve Months And A Day" joins the growing list of CDs (including four Fatea downloads) in which the cover art was created by Daria Kulesh. But the connections between this duo and Daria go much further. Amongst the merchandise at her gigs Daria has some badges made by Vicki. At their gigs, Vicki and Jonny are selling badges designed by Daria, from the cover art on this album. Not only that, one of the tracks on this album is actually dedicated to Daria.

On the cover notes, each track is addressed by title, with a sub-title in the style of an episode of the American TV sitcom "Friends" such as 'The spooky one' or 'The one romantic soppy one, even though it includes lots of death', and with a dedication to someone who perhaps inspired the song or to someone who has been on a noble quest to win the heart of a lady.

In the same way that Justin Hayward linked two songs together to create the Moody Blues song "Question", many of the twelve tracks on the album are formed from two or more different tunes, linked together to create a total greater than the sum of its parts, particulary in the case of the instrumentals. The effect of this is that the tunes develop as they progress and take you on a journey.

The cover art is actually very influential in the way that one interprets the songs. Vicki and Jonny say that when they were planning the album they were looking for a theme, but decided that any such theme would exclude them adding certain tracks, so they finally settled on the idea that the 'theme' of this collection would simply be themsleves, and that they would play antything that pleased them. However, Daria has drawn an image for each of the twelve tracks, and arranged the icons like numerals around a clock face. With the CD playing on auto repeat, the tracks cycle round like the hours on a clock or like the months in the years, so with such iconography it is hard not to assign some sort of seasonal theme to some of the songs.

And yes, some tracks definitely do seem to fit well into a calendar or a clock theme: "Mary Free", for example is an old traditional Carol with lyrics dating back to the 15th Century, often called "When Christ Was Born Of Mary Free". The tune is traditional, but not one I'd heard before. Interestingly, the intro seems to be a variation of "God Rest You Merry Gentleman", so I wonder whether the two songs are related. Clearly, if there was a seasonal theme to the album, this track would represent December.

"Midsommarn" is a Swedish word, and as I'm sure you can guess, translates as Mid-Summers. The track is an original instrumental, and is formed of three movements: "Calle's Brudmarsch", "Marsch efter Calle Svankvist" and "Midsommarn". If the tracks were to be arranged on a calendar or clock face, this would be situated on the opposite side to "Mary Free". The name, Calle Svankvist, also features on the final track on the album "Calle Slips", another Swan and Dyer original instrumental again formed by three movements, "Polska efter Calle Svankvist", "The Mallet Moment" and "Pinky and the Cradle", the latter two movements being Irish slip jigs, hence the overall title of the piece. I have failed in my attempt though, to find out who Calle Svankvist or Calle Svanqvist is, or was (assuming that it is a person). The only references to the name I can find on the internet are associated with songs played on the nykleharpa (usually featuring Vicki). My theory is that Calle Svankvist was a nykleharpa player in Sweden long ago, and was an ancestor of Vicki's and Swan is an Anglicised version of Svankvist. I will attempt to find out in time to review their next album.

Another song that could potentially be linked to a month is "Gallows Tree", a Swan and Dyer tune, but with lyrics taken from the poem, "The Demon Of The Gibbet" written by Fitz James O'Brien, an Irish poet and writer who went to America and fought in the Civil War, dying from tetnus as a reult of his wounds. The song tells of a couple riding past a tree that had been used to hang someone. The ghost of the hanged man still haunts the tree and is cold and lonely and seeking company. Only one of the couple manage to complete their journey. An ideal song for Halloween.

"Ai Vis Lo Lop" could represent spring on the seasonal clock, as it concerns leverets (young hares) dancing round a budding oak tree. As 'midsommarn' is a Swedish word, I hazarded a guess that 'ai vis lo lop' was also Swedish, but I was wrong. It is, in fact, a language I had never even heard of before: Occitan, though the words are almost completely translatable directly into English: 'Ai' voiced the wolf. An utterly mind-blowingly brilliant track. The instruments that they have used have an extraordinary tone, like no other song I've ever heard. Particularly the final crescendo. Wow!

I knew that Dante Gabriel Rossetti, the founder of the Pre-Raphaelite movement, was a poet as well as a painter. He famously buried the majority of his poetry in the grave of his wife Elizabeth Siddal, and then subsequently dug her up to retieve them. I had no idea, though, that William Morris, another of the Pre-Raphaelites, was also a poet. "Two Red Roses" is another beautiful track on the album, original music by Vicki and Jonny, with the lyrics taken from a work by Morris. A knight on his way to battle hears a young woman singing a song about two red roses across the moon, and the song sustains him through the battle.

Something I hadn't ever really given any thoughts to before: touring folk musicians get booked at numerous different clubs across the country. At each one, the people they meet are bound to be friendly as the club owners woudn't have booked them if they didn't like them, and the punters wouldn't turn up if they weren't fans. Which means that wherever they go they have wonderful conversations with people they'd probably like to remain friends with. Chances are though, it could be another couple of years before they are invited back, by which time may be the personnel have changed. The musicians might never meet up with their friends again. The subject is covered poignantly on "Folk Club Song", a song about all of the people they've met on their journey whose names they hardly knew, but who they miss.

"Grandpa Joe" is a riotous foot tapping reel, and really feels as if it is a traditional song that you've known for years, but, of course, it is brand new. The lyrics are just as weird as if they have evolved over centuries. Each verse starts with 'Grandpa Joe has a hole in his ...'and then includes some item such as hat, shoe, etc. with the hole. (My favourite line being 'Grandpa Joe has a hole in his pants - he can't sit down for fear of the ants'.) The song then continues with a request for a dance, then explains that the reason they want to dance is because Death (or the Devil) is coming.

If you heard my favourite track on the album, "Elegy" on Radio 3 or Classic FM, and they accidentally introduced the tune as a piece by Beethoven, say, played by The London Symphony Orchestra, you wouldn't bat an eye-lid. But don't be fooled. This is no orchestra, just Vicki and Jonny, with the most classical piece you're ever likely to hear on a folk album. Originally written for piano and double bass, they've adapted it for piano and oktav nykleharpa, and it is truly amazing.

The tracks on "Twelve Months And A Day" are spread across the calendar, around the clock, and across the spectrum of music genres, from jigs, to polkas, to traditional folk to classical. Something for everyone's taste.