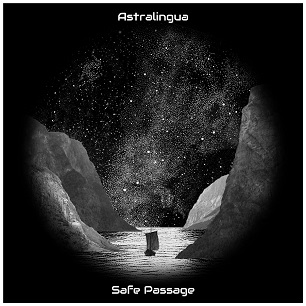 
There are lots of different types of folk music that artists use to describe their music - trad folk, indie folk, alt-folk, folk rock, neofolk to name but a few. Astralingua call their genre space-folk, which is a new one to add to the list. Situated somewhere between folk, classical and psychedelia, the Denver based duo explore the transition between worlds and perspectives. Composer Joseph Andrew Thompson and backing vocalist Anne Rose Thompson embraced a nomadic life travelling to all corners of the world to write and record the album. From the Mojave Desert to the Sierra Navadas and France, the album is infused with their journey.

Safe Passage begins with the first two singles, Plunge and Visitor. The former is an upbeat start with a wonderful insistent string accompaniment that gives it a sense of urgency. Visitor is a far more haunting and ethereal track, with a real slow burn to it, and some achingly beautiful flute throughout.

There have been two more singles released prior to the album. A Poison Tree is a playful take on a William Blake poem, giving the words an ebb and a flow that really brings it to life. Space Blues is the latest release, and is a title that almost comes across like a statement of intent. As with Visitor, the emphasis is on creating a song which feels a lot like a sonic embrace. These are tracks that will comfort you and encourage you to drift off with the flow.

Safe Passage is a glorious album, and while the lyrics deserve attention, this is music you will put on to chill out to. There is something almost soporific about the record, and it is music that could soothe the most savage of beasts. Astralingua may explore the transitions between worlds, but this is the most tranquil transition you could ever hope to experience.