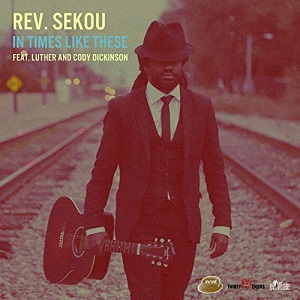 
Rev. Sekou (The Reverend Osagyefo Uhru Sekou, to give him his full name) is a US preacher, teacher, documentary filmmaker, writer and civil rights activist, strongly involved with the Black Lives Matter movement. born in St. Louis, Missouri and raised in rural Arkansas he's a much-travelled progressive thinker with deep cultural roots and here makes his first foray into music on a set that combines righteous gospel with stomping Hill Country blues and more than a hint of deep soul and rock.

This is just about the most vital blues album I've hear in a long time. With the very able assistance of Luther and Cody Dickinson of the North Mississippi Allstars, Sekou grabs the tropes and traits of blues and gospel and fires them up with contemporary edge. This is rebel music, the blues as the stripped-down soundtrack to resistance.

Opener 'Resist' sets out the Rev's stall in fine style. A raw-boned combination of stinging guitar, organ and testifying call-and-response vocals, a protest anthem for our Trumped-up age. 'At Times Like These' is stompier, with pounding piano and amped-up touches of guitar. "At times like these, we need a miracle," sings Sekou. "Ain't nobody gonna save us. We're the ones we've been waiting for."

Next up, something of a surprise, with A radical re-imagining of Bob Marley's 1970s reggae anthem 'Burnin and Lootin' as a slow and intense slice of gospel. Actually, given its lyrical deployment of biblical images for radical ends, perhaps this is not so much of a surprise after all.

'Lord I'm Running (99 And A Half Won't Do) is the Rev. reworking of the Dorothy Love Coates gospel classic and features great contributions from Al Green's right-hand man Rev Charles Hodges' on organ, AJ Ghent's Sacred Steel slide guitar and call-and response vocal support from Raina Sokolov-Gonzalez. 'Muddy and Rough (Woyoya)' has a similarly spare instrumental backing, over which Sekou preaches the struggle for freedom and redemption. 'The Devil Finds Work' renounces Satan and all his temptations in suitably frenzied style.

'When The Spirit Says Move' is a more traditional upbeat gospel-blues, but none the worse for that, especially when AJ Ghent lets rip again. Sekou delivers an impressive gruff croon on the 60s soul style ballad 'Loving You Is Killing Me'.

As the album approaches its end, 'Will To Win' sets a Civil Rights message to some brooding guitar-driven rock, in contrast, the closing 'Problems' starts out as a straightforward piano-led inspirational ballad, before working up a head of steam with horns, frenzied guitar and wailing vocals.

Sekou's updating of blues and gospel may not be as musically radical as the recent work of Fantastic Negrito, but he makes up for it with urgency and passion. There can be no doubting that the Rev. means every righteous word.