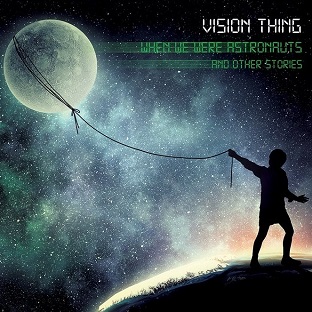 Vision Thing
Album: When We Were Astronauts and other stories
Label: Self Released
Tracks: 11
Website: http://www.visionthingband.com/


From the opening line "We are on the edge of the world", the haunting vocal of Charlene Walmsley, underpinned by single notes from David Windsor's violin, your attention is firmly grabbed.

You know from those first few bars that Vision Thing's new album is going to be rather special. "Silver Darlings", tells of the challenge of herring fishing in the North Sea in the 19th Century, dwindling stocks, the need of the next generation to leave the community to seek work. Greek mythology in reverse, no sirens luring boats onto the rocks, this time it's the fisher people singing to the little darlings to call them into the boats. Voices so sweet they are impossible to ignore.

Music that matches those voices. "There is a Seam", coal mining, an examination of the wealth left by the past and now ignored by the present. "There is a seam beneath this land, a shining vein, black carbon band….compressed and bound and gathered fast, from blood and bone, roots and remains" a resource found not worthy of using. "The Pits and the People, they are the same". Social commentary, it's a song that gets under your skin, the fluid bass lines of Paul Cunliffe, the fiddle runs and the finger picked guitars build the song over which Pete Cunliffe adds his blissfully mournful yet soulful vocals.

Falling in love, eloquently described by Charlene, the highs of heaven, the fear of falling "Twenty Thousand Feet", the thought of losing control completely. "I'm spinning in circles with all that you said, I'm lost in the shadows and lost in my head, I'm seeing the pattern but losing the thread, I'm keeping the flame and bringing the light, I'm shining a beacon to light up the night, I'm guiding you home so follow the light". The uncertainly of love summarised in a song. Love is an illusion, or is it?

"Haul Away", percussive fiddle, persuasive chorus, a tale of the King's Shilling and all that entails, reminiscent of Phil Odgers excellent solo work from The Men They Couldn't Hang.

"Trysting Tree", the title of Vision Thing's previous EP, almost primal rhythms, a steadfast certainty, a silent witness to generation after generation of human needs, the one constant keeping it's secrets, you'll return to the Trysting Tree.

Scotland, a place of beauty, of seclusion, of bleak elemental forces and yet there's those moments that make everything so perfect. That short period when the light encompasses all. "As the clouds break over the mountains. And sunlight bathes the sea. Now the magic hour is on us. There is no place I'd rather be". The "Magic Hour" an uptempo bouncy song.

A contrast to "All The Bonny Birds Have Flown Away" which slows your heartbeat, you relax, such beautiful harmonious music, one of the trade marks that makes Vision Thing, who hail from the North West, stand out. It's melancholy musing about the effects of war, sad and poignant.

"When We Were Astronauts", an echo of memories, growing up, time slow, a time of innocence, childhood games limited only by our imagination, the darkness of the world yet to show. As astronauts we reached for the stars and found them, held oceans in our hands. Then in the blink of an eye, distances become real, time flies, where did our lives go? Eight and a half minutes of reflective music, each time you listen you pick out something you missed, the low whistle, the restrained keyboards, the noises, an absolute ethereal joy.

The final track. "Mumurate (safety in numbers)" is simply stunning. Strummed acoustic guitar, violin, keyboards and lyrics that amaze, it would fit seemlessly on an early Cockney Rebel LP and in my book there is no higher praise. Words that are a tribute to the flight of starlings, "Shall we dance in the half-light of dusk. In pirouettes of trust. Describing a sweet geometry. To sooth our wanderlust." Just a small sample of the wonderfully descriptive and evocative lyrics by Pete Cunliffe.

It's one of the highlights of "When We Were Astronauts and other stories", eleven original tracks by the band assisted by John Kettle (Merry Hell) who recorded, produced and guested on a large portion of the album. (The cover art work a sly nod perhaps to the "Drag Down The Moon" release by The Tansads, the previous incarnation of Merry Hell)

In summary then, Vision Thing, a talented bunch who make incredibly beautiful, blissful music that you never get bored of. Simple words to express great truths.