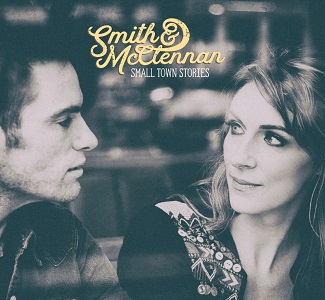 
Having released eight albums and notched up numerous awards, Emily Smith is well-established figure on the Scottish folk scene, but, while he's played in her band for 17 years, this (joined by producer Ross Hamilton on piano, bass and drums) marks the official debut release of her musical collaboration with New Zealand-born husband Jamie (they put out an unplugged featuring three of the songs last year), drawing on their life in rural south-west Scotland and such influences as Chris Stapleton, Kacey Musgraves and Welch & Rawlings. Save for one traditional number and one cover, the material is all from McClennan's pen, kicking off with 'Firefly', a robust, musically throbbing song about homelessness,addiction and the search for redemption embodied in the titular insect.

The trad credit comes next with Smith's arrangement and slight rewrite of 'Sailin's A Weary Life', which, in contrast to the more sombre and stark version released earlier this year by fellow Scot Claire Hastings, has more sprightly, Appalachian-flavoured melody. McClennan steps up to sing lead on the simple acoustic strum of 'Hummingbird', Smith's harmonies arriving in the second verse, a sad song of reassurance in time of loss from beyond the grave the album moving from comfort in death to a celebration of life with the fingerpicked 'The Sweetest Girl', a harmonised song about their young daughter that lyrically watches her grow and looks to the years ahead

It's back to darker matters with the rhythmically nervy 'Long Way Down', a drum heavy, guitar resonating return to the theme of addiction as an escape from the hurt before, again accompanied by a resonant guitar etching a simple riff as well as a mid-song piano solo, Smith takes emotive lead on 'Leaving', a number about loss "for a friend who won't grow old" and the unanswered questions left behind.

The choice of cover is 'Better Than War', a 60s protest song by New Zealand singer Katherine Faith 'Willow' Macky, here given a waltzing jazzy blues guitar arrangement with Smith's voice soaring on the fiddle-backed chorus. It's followed by my favourite cut, 'Bricks and Mortar', McCennan singing lead and Smith harmonising on memories of home and life left behind, of the bonds of family and how "All the dreams I held were broken, when love left me that day", a number that evokes the classic moments of Gregson and Collister and Richard and Linda.

The album ends with, first, the anthemic waltztime 'Wait For Me', McClennan again on lead on a Celtic infused fiddle coloured folk rock duet about being away from home and the promise to return, followed by the stripped back the achingly lovely, fiddle-warmed 'One More Day', Smith offering a gentle, bittersweet reflection on loss, the line about "nights you couldn't sleep always seem much safer in my arms/Lines drawn on the wall remind me of the games we would play" suggesting that of a child by a parent or sibling.

It was clearly long overdue for McClennan to be promoted to a more prominent role in the musical relationship, so here's to hearing them unfold stories yet untold together in the years to come.