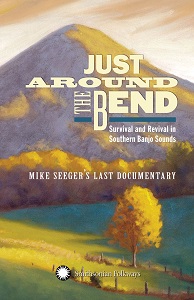 
Technology advancement has allowed us to record, share and store music in efficient ways that have benefited all. It's opened up access to music from around the world and provided an opportunity to dip back into history for the more serious music fan. With labels like Topic Records in the UK who have recently been celebrating 80 years of history, it allows them to make available material from the breadth of their largely home based folk music catalogue. Over in the US, Smithsonian Folkways perform much the same function. With a history of just over 70 years under its belt, they continue to add to their catalogue drawing from across the world as well as the rich seams of American folk music.

One of their recent packages, 'Just Around The Bend', turned out to be the last documentary work from Mike Seeger whose life and that of his siblings, including Pete and Peggy, has been dedicated to folk music. Before his passing, Mike Seeger was as keen to build the knowledge around folk music as much as to play it. In this sense, the documentary style of the two CD plus one DVD combination that makes up 'Just Around The Bend' fits perfectly with the educational aim of the label itself. Its sub-title, 'Survival and Revival in Southern Banjo Sounds' sets the context of what you'll find. A word of mention should also go to the comprehensive 80 page book that supports the package with its map of the recording travels of Mike Seeger and his wife, portraits of the banjo players they encountered and detailed commentary on the recordings herein. Most helpful to the uninitiated is the glossary of terms which helps you understand, for example, the difference between the downstroke 'clawhammer' banjo playing style and upstroke 'up-playing' style as you'd see typically used on a guitar.

The 19 virtuoso players on this package span a wide age range but are presented geographically on the CDs with the first one concentrated on the states of North Carolina, West Virginia and Virginia, the second one on Kentucky, Alabama and Tennessee. This arrangement helps to understand the differing approaches found in banjo playing. As we discover on the DVD, much of this has been learnt by watching the playing of others and being encouraged by them. Whether that be family, for example the father of Riley Baugus made him a banjo, or as part of formal education as occurred with Rhiannon Giddens.

In terms of the material available here, there is a slight overlap of songs available on the CDs and those found on the DVD. However, this is minimal and DVD content is best seen as an opportunity for an interview to provide some background while the visuals give away banjo playing technique to some extent. Both the CDs and DVD last for 110 minutes covering songs from the tradition including such old time classics as 'Cumberland Gap', 'Pretty Polly', 'Soldier's Joy', 'Cotton-Eyed Joe' and 'John Henry'.

As you'll have gathered, this is a package in which to immerse yourself rather than one where you'd be selecting individual tracks to playlist. Anyone encountering these recordings would certainly come away with a better understanding of what can be something of a mysterious instrument. Having been suitably soaked in the richness of this package, from now on, those musicians who have built their stage patter around banjo based jokes are going to have to look elsewhere for something to ridicule.

Just Around The Bend