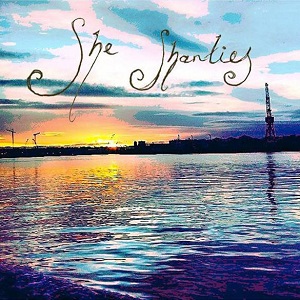 
The She Shanties were once responsible for me getting very, very drunk. How can you not like a group that does favours like that for you? A no-nonsense group they introduce themselves in a wonderfully direct style, “We're women – We sing shanties” and they do it very well indeed. There are currently twelve in the line-up and they're each a good singer in their own right. Combine that with a recording that has obviously be done by a sound engineer who knows their job and the result is an album of real quality where every voice can be separately heard and the lyrics are crystal clear.

“Futtock Shrouds” is their first full album, following on from the EP “Spanker Boom” in 2015 and if you buy it be warned that it is not to be listened to in quiet contemplation. Sea Shanties originated as work songs to be sung by crew so they're designed to be joined in with and I certainly found myself doing that, listening and learning the responses and then singing along. Fortunately my journey to work involves a car rather a train, but it's a wonderful experience.

The twelve songs cover the whole range of emotions that sailors must have gone through on long voyages. The album opens with Whiskey Johnny, which will be familiar to Jon Boden / Bellowhead fans, but this version has a more original stripped back feel to it with it's admiration of the Water of Life.

Drink, or grog, seems to have played a large role in the life of sailors but Ben Backstay shows it can have terrible consequences. This is a rollicking tale of a bo'sun who got drunk and fell overboard, unfortunately just as a shark was passing by. The crew tried to help him “ We heaved Ben out some tackling, Of saving him in hopes; But the shark he bit his head off, So he could not see the ropes.” This shanty also has the most challenging chorus on the album but listen enough times and you'll get there. Giving you the words in advance probably won't help much.

Another tune I really enjoyed was Noah's Ark, originally collected by none other than Cecil Sharp, and without giving away the ending you'll find out how dogs came to have cold noses. It sounds very plausible.

As wonderful as these fast paced tunes are, a whole album of them might be too much but the album is balanced out by some more considered songs nad proof that the genre is still living. The Light From The Lighthouse, written by American Bob Zentz is based on a traditional gospel format, with the idea that the lighthouse guids you through both good and bad times. Sung by the massed voices of the group it's rather beautiful and moving.

The album ends, fittingly, with the traditional Farewell Shanty, another beautifully sung song that also has a gospel / religious feel to it. The farewell in this case is leaving port at the start of a voyage and amongst the instructions for getting the ship ready to sail is the realisation there will be dangers ahead and the hope that God will be by your side if you have to haul away to heaven as so many sailors did.

This is an album that everyone who enjoys well presented traditional music should get hold of and it deserves to be widely heard. It's now released and available through the website but if you get the chance buy it at a show or festival after seeing The She Shanties, if you're still upright. However, if you're planning on buying it from them in a beer tent, you probably won't be.

For those who're wondering, a Futtock Shroud is a part of the rigging on a masted vessel and perfectly innocent.