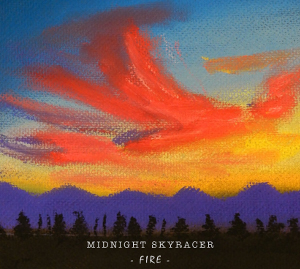 
That the self-styled ‘girl-power bluegrass band’ Midnight Skyracer are less than a year old but have already taken the music world by storm is perhaps less surprising, but none the less admirable, when you see the stellar line-up which goes to make up the five-piece outfit.

There’s Laura and Charlotte Carrivick, who have graced the circuit for ten years plus as The Carrivick Sisters, and now as part of Cardboard Fox, bringing their considerable fiddle and guitar skills respectively to the table; Leanne Thorose, a powerful singer and virtuouso mandolin player; Tabitha Agnew, a nineteen-year-old banjo prodigy and fine singer, and Eleanor Wilkie, bass-player and songwriter extraordinaire.

With all this talent and experience at their disposal, it would be more shocking if their debut album was not a success, not least after some storming festival shows last summer, including a wildly successful outing at a rammed Club Tent at Cambridge Folk Festival, which I was lucky enough to witness.

The album is made up of seven originals with contributions by all five band members, along with some ‘carefully-chosen nods to their influences’. It opens with Leanne’s manic ‘Fuel To My Fire’, a barnstorming banjo and fiddle-led announcement of intent, if ever there was one. The traditional ‘Susan Anna Gal’ follows, showcasing Tabitha’s softer vocal style to great effect. Hazel Dickens’s country lament ‘Working Girl Blues’ comes up next, and already the range of styles available to this brilliantly flexible line-up is evident.

The rest of the album “romps”, in Ron Block’s sleeve-note words, “through an array of melodies and tempos, with strong able writing by Eleanor and Charlotte”. Indeed the writing is impressive and innovative, and overall the record manages to capture the hard-driving liveliness of the live show, a rare skill indeed for which Josh Clark, along with the band members who oversaw their own production, must take great credit. Highlight for me has to be the sisters’ ‘So Long, Goodbye, We’re Through’, an upbeat song of rejection with raunchy vocal from Leanne and fine fiddle, manic mandolin and brilliant banjo interludes between the verses.

With all the band members committed to other projects, as is the way these days, it remains to be seen how much we will see of Midnight Skyracer over the coming year, but they do have dates in the diary across the summer, with no doubt more festival appearances to be added. Catch them live if you can, but if you can’t, then this album is a more than adequate substitute.

Fuel To My Fire