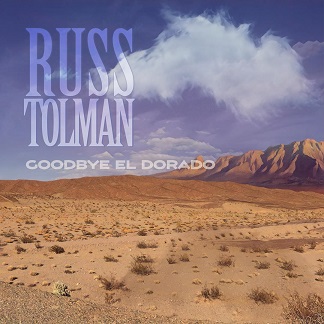 
Former frontman with 80s Paisley Underground guitarslingers True West, Tolman has been pursuing a solo career since 1988, this being his ninth album. It has a relaxed border country vibe opening with the accordion-coloured, trumpet-shaded 'Los Angeles,' a love letter to his old stomping grounds while 'North Hollywood Dream' is a slow sway tale of a new arrival in from Idaho trying to make it in showbiz while life gets in the way and the reflective brass-burnished cantina-soaked ballad 'California Winter' about turning life around.

Likewise, '405' has him leaving L.A., stuck in freeway traffic thinking about how dreams and reality rarely make for bedfellows, a similar train of thought guiding the twangy guitar 'Time Flies', one of three bonus cuts, where he notes how "every day takes its toll/And you find yourself not wiser not smarter" with its catchy pedal-steel coated refrain of how "Time flies but wisdom walks."

Indeed much of the album travels a similar route, the trumpet-sheened retro sounding twangy chugging title track another sign off to the Golden City by the Sea, heading to 'Yuba Cit'y in North California to " barrel in like a drunk debutante" on the back of a steady drum beat, boozy piano and electric guitar solo.

While regret may lightly tinge many of the songs, there's darker shades to be found on 'Kid', a musically upbeat mandolin-flecked shuffle about a California teenage girl from a broken home with an abusive step-father and an emotionally absent mother looking to stay out with her friends as long as she can, while 'Do You Like The Way' turns a mirror on a 'lovable loser' drowning their talent and pain in beer and playing the barroom clown fool.

At the end of the day, and (save for the other two extras, brushed snare shuffle 'Pacific Rain' and the casual swaggering melodic cascades of 'Satellite Bar') the end of the album, 'Take It Easy, Take It Slow' serves up the moral, on the back of resonator guitar, that "We're all gonna go down past the rodeo/On our way to our just rewards" and that "Time goes by fast enough/We don't need to give a shove." So, kick back, put on the headphones and join him for a while.